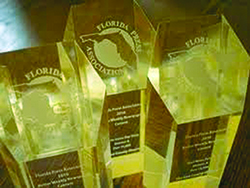 When September rolls around and the Florida Press Association holds its annual convention, the Boca Beacon crew will be looking to win or place in five categories.

It was announced earlier this week that Beacon editor Marcy Shortuse is up for two awards – one for noninvestigative reporting and one for the oh, so prestigious “News Oops” of the year award.

We aren’t going to tell you what that story was, by the way, unless we win. Then we will have to tell you.

Reporter Sue Erwin is up for a win in the “Sports Page or Section” category as well.

We’ll let you know in our edition after Friday, Sept. 16 what exactly we brought home.