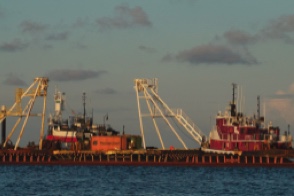 Beach renourishment efforts continue in the Historic District and Lighthouse areas, after starting on the afternoon of Tuesday, June 4. They are currently working 24 hours a day, at an average of 600 feet per day.

You may have noticed what appears to be a giant sifter being used, and its use has confused some people.

“The contractor is not sifting sand right now,” said James Yocum, public affairs specialist for the U.S. Army Corps of Engineers, Jacksonville. “The objective is to provide nice, clean sand for the new beach, and the material is currently clean and free of any oversized material. The large machine you see is called an extractor, and it is on site as a stand-by measure. It will only be used if the contractor sees oversized material in the fill, which would be anything over ¾ inch.”

Yocum said USACE is very appreciative of how cooperative the residents and visitors of Gasparilla Island have been so far in staying out of the 1,000-foot active construction area.

“We realize that beach traffic usually increases on the weekends, and we ask that beachgoers continue to stay safe by following the posted safety signs and cones placed in the closed area of the beach and cooperate with the security personnel who are on site to help keep everyone safe,” Yocum said.