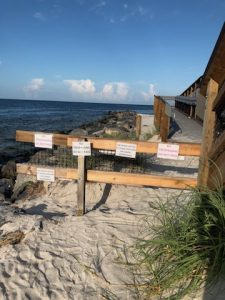 The wooden walkway that is accessible from the Gasparilla Island State Park is partly closed due to beach erosion.

The boardwalk itself has two exits that lead to the beach. If you are walking toward the lighthouse from the parking lot, the path splits. One way leads to a ramp with steps leading to Boca Grande Pass, and the other leads toward the Gulf of Mexico.

Gasparilla Island State Park Manager Zac Lozano said erosion has gotten so bad that when people come off from the boardwalk they cannot safely traverse toward Hill Tide Estates.

“Instead of having people walk across rocks, we decided to close it off,” Lozano said. “You can’t walk around the boardwalk anymore, because there is no more beach left. There is the boardwalk and the rocks.”

The park manager said the staff decided to put up signs saying “No Trespassing” and “Do Not Pass” where the ramp ends, because last weekend people were walking on the rocks that are around the boardwalk.

“We’re trying to discourage people from walking across those rocks,” Lozano said. “We didn’t have signs up last week, and people were crawling all around them. We’re doing our best to keep the area as safe as possible.”

The long-term goal is a beach refurbishment planned for 2020.

Lozano said there is no feasible way to fix the problem at this time.

“We would have to do the entire area, and we are working on the permitting process right now,” he said. “We’re trying to get everything in order to try to work with Lee County contractors while they are out here doing the refurbishment, and hopefully we can work with them with our own funding.”

At that time state park rangers hope to build the beach back out by the lighthouse.

Until the repairs are completed, visitors to the park are encouraged to use the beach access path at the picnic pavilion or the chapel boardwalk.

In the meantime, the boardwalk at the former beach access on 5th Street has been closed, as it washed away not long after being opened. Stay tuned for more information on that.