From the archives: A history of Boca Grande churches

In a 1984 Boca Beacon, the late Carey Johnson covered the origin of two of the oldest Island churches and the early families who supported their creation. Carey Johnson was the father of Robert Johnson, an author and editor of the Boca Grande Journal as well as a Port Pilot when there was an active port at the south end of the island. This edition and others from the 1980’s have been archived by Small Town Papers (bcb.stparchive.com). The article is reprinted here as it appeared in 1984.

This is a story of two old Boca Grande institutions and a few of the past and present individuals involved with them over the years. Not an ecclesiastical diatribe, nor a political church/state controversy with which the news media is so involved today, but the story of the history and camaraderie of two of the Christian churches on the island.

Historically motivated, we will at this time try to remember and revive some of the highlights of the Methodist and Baptist churches as they were, we believe, the first two organized churches in Boca Grande. At a later date we will bring to the readers a history of the beautiful Catholic Church on Park Avenue, and the Episcopal Church at 4th Street and Gilchrist Avenue, where the late Rev. Ben Williams was the much beloved pastor for many years.

At this writing the exact history and dates are a little vague, but as we recall from conversations with our forerunners, from old records and from memory, the Methodist Church was chartered and organized by the local membership about the same year that the railroad was completed – 1910 – and their sanctuary and parsonage was also built that year on the corner of Gilchrist Avenue and 3rd Street.

Mrs. Fred G. (Mary Frances) Thompson, “Mama Dear” as she is affectionately known, is the oldest living member, and we believe that she and the late Mr. Thompson were married in that church in 1914. The church plans to celebrate her 70 years of service to her church and community later this year.

Many others through the years, both lay persons and ministers, can be remembered. Just a few of the older families are the Speers, the Gaines and the Fugates. Many young pastors got their start here to go on to become bishops, etc.

The first Baptist Church at the corner of 4th Street and Gilchrist Avenue has enjoyed a parallel history of worship and service in Boca Grande. Formal organization was started in 1910 and services were first held in a temporary schoolhouse located on 4th Street near the site of the present church building. In 1915 the present church sanctuary was constructed, and in 1933 the pastorium (pastor’s home) was built. Then some years later the educational building was constructed.

Some of the organizers and early members were the Johnsons, Thorntons, Presleys, Polks, Hargises, Joneses, Hollands and Brantleys, as well as a number of pastors who, from time to time, went on to much larger fields of Christian work in the Southern Baptist Convention.

We remember a unique and most Christian spin-off of these two churches’ activities was that for many years, from the year of organization until the mid 1930s, the Baptists and Methodists held morning and evening services on alternate Sundays. The Baptists would have services on the first and third Sundays, and the Methodists on the second and fourth Sundays.

During this period the Methodist minister lived in Boca Grande and traveled by rail to Fort Ogden to preach every other Sunday. The Baptist pastors lived off the island, arriving for the weekends and a visit with a family of the congregation.

The beauty and advantage of this practice was the congregation of one church would swell the crowd at the sister church each Sunday in true Christian practice. There were very few “doctrinal” misunderstandings, and all enjoyed seeing each other.

Speaking of services, each church now worships every Sunday, but Rev. Ed Frantz of the Baptist congregation has just announced revival services will be held six nights at 7:30 p.m., November 4 – 9, at the Baptist Church. The speaker will be Rev. Virgil Mulkin of Bessemer, Alabama.

Of course, a special invitation has been extended to Rev. Patrick Davenport and his Methodist congregation as well as to all others in the community. 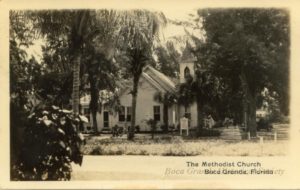