BY MARCY SHORTUSE – If you haven’t noticed, it is officially summer in Southwest Florida. The humidity is back, the temperature rarely skates below the low 80s (high 70s if we’re lucky) at night, the Gulf water is warm, and the sunsets are spectacular. If you’ve ever wondered about that last mention of amazing sunsets, about why they are so much more colorful and brilliant, it’s not for a very glamorous reason. The reason is African dust.

When the winds turn as the weather warms some time in May, they start to come steadily from the east/southeast quite often. As it happens, Africa is east of us by a few miles (about 5,000, actually). At the same time our winds are changing to a summer pattern, so are theirs.

It is believed that a good portion of the dust that becomes airborne comes from a place called the Bodélé Depression in Chad, which is an ancient dry lake bed in the Saharan Desert. When summer comes and the air heats up to an average 110-degree temperature, the windstorms whip through the lake bed and stir up the dust made, in part, of sand, iron and phosphorus. When this airborne dust and dry air floats off the coast of West Africa, sometimes climbing as high as four to five miles, it forms the Saharan Air Layer, a segment of the atmosphere that moves across the North Atlantic Ocean every three to five days from the late spring through the early fall.

Depending on weather conditions, that dust can get caught up in the westerly-moving trade winds, headed right for us.

The dust is comprised of tiny mineral particles, including iron and other substances. During times when the sun is low on the horizon, such as sunrise and sunset, the rays of the sun have to travel farther through the earth’s atmosphere. The dust particles make that light scatter, so it’s almost like Mother Nature’s disco ball.

While the dust is always there in small amounts, you’ll notice in the summer even our blue skies quite often look a bit milky … and that’s the dust. Peak times for the dust are from mid-June through August. Meteorologists believe that the dust often stifles storm systems and hinders their development by tearing clouds apart with dry air and blocking a percentage of the sun’s rays, which in turn cools the Gulf temperatures down.

Unfortunately, many scientists believe that the nutrient-rich dust that falls into the warm waters of the Gulf of Mexico in the summer can also feed algae that we don’t want around, like red tide. Microorganisms in the Gulf love to feed on iron-rich nutrients, and African dust has a lot of it.

The theory that African dust will almost certainly bring about red tide is still not entirely proven. For instance, in June of last year we had one of the heaviest Saharan dust concentrations hit our coast that scientists had ever seen. Scientific American Magazine reported that “The plume darkened the skies in Puerto Rico … causing some of the highest atmospheric aerosol concentrations the island had ever seen … This particular plume is among the most extreme on record, and the thickness of dust particles in the atmosphere was the highest observed in 25 years of satellite measurements.” 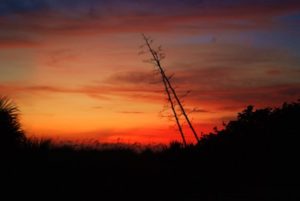 In an average year’s summer, African dust rains down on us – and into the Gulf – in the amount of approximately 180 million tons. So, you can imagine how much came to us in the summer of 2020.

But in 2018, when we had one of the worst red tide experiences this coast has ever seen, African dust was present but not in the same prolific amounts as it was last year. Granted, vastly different meteorological conditions were certainly at play during both years for them to be so different, but it goes to show that African dust is not the “end all and be all” of what makes red tide happen.

People with certain allergies can definitely feel the dust’s effects. When discussing particulate that can be hazardous to human breathing, researchers divide the sources of the particles into two groups – those that are smaller than 10 microns in diameter, and those that are smaller still, smaller than 2.5 microns in diameter. While the larger particles will get trapped in the nasal passages, the smaller particulate can travel through the nose and mouth and further into the body. In the direst of examples, our area of the country has experienced dust-related outbreaks of Valley Fever (a rare fungal lung infection) and arsenic poisoning. At the very least if you have asthma, COPD, bronchiolitis or other chronic conditions and you know that we are experiencing a bout of African dust, stay indoors as much as possible.

If you don’t have allergies though, now is the time to get out and watch the sunset when you can.