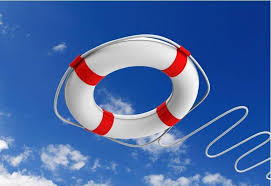 Theresa Wise’s simple shark’s tooth hunting expedition on Wednesday, July 12 at the south end of the island turned into an ordeal she will never forget, and she has a shell sifter and a pink pool noodle to thank for really saving the day.

Theresa Wise’s simple shark’s tooth hunting expedition on Wednesday, July 12 at the south end of the island turned into an ordeal she will never forget, and she has a shell sifter and a pink pool noodle to thank for really saving the day. Theresa lives just off island and comes here frequently to go to the beach to walk and follow her passion for finding sharks’ teeth. When she came to the beach that Wednesday, she saw what appeared to be a family – an older man and woman, a lady who appeared to be their daughter, and a young one who might have been their grandchild. They had set their beach spot up right next to the rock jetty at Gasparilla Island State Park.

“I saw the older lady sitting on a life jacket – not wearing it – in the water,” Theresa said. “I heard her call out to her husband, then heard someone else yell. Her husband went out into the water just as I started out there to her, thinking I would hand her my shark’s tooth pole to grab onto. Then her husband started to be swept away by the current as well, but by that time two more ladies and another man came out to help.

“When I got down by the rocks the current starting taking me as well; it felt like someone was really yanking on me. I started pulling back really quickly, backpedaling, and I grabbed  hold of the rocks with my legs. I then became the anchor for a mini-human chain.”

Theresa said the woman’s husband managed to push her up on the rocks, so she was safe … but then he started to be taken away by the current.

“When I looked up, he was swimming back to us, but for every four strokes he swam it looked like he was losing ground by two or three strokes,” she said. “But with all of us helping, we got him, too. I don’t exactly remember how, I just know it involved the shell sifter and a pool noodle.”

Theresa, a former lifeguard, realized after the fact that she had no choice but to go and try to help; it was more of an automatic response than anything else. Unfortunately, she didn’t realize until afterward that she was still wearing her waist pouch containing her cell phone and wireless ear buds, which were ruined. She also suffered numerous scrapes and contusions from the rocks, but she is healing now. While the experience was expensive, she said she wouldn’t have changed it for the world.

“We had been watching the boats in the Pass all week, drifting by like they were just matchsticks,” she said. “We had been talking about how swift that current was. When that woman’s life jacket she had been sitting on popped out from under her, it was immediately gone into the Pass, it was that fast … it just disappeared. I originally thought about turning the other way to walk, but something steered me that way. They were so close to the Pass already, right there by the rocks, that the man almost went out into the Pass. I’m just so glad I was there to help, especially after what happened to that young boy this week.”