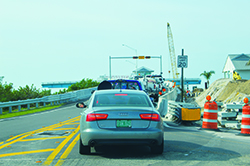 BY MARCY SHORTUSE – On Tuesday, March 2 at approximately 10:30 a.m. it was beautiful weather for a walk … but not necessarily for a group of elderly travelers who were making a pilgrimage to an island church. They found out the hard way that weight restrictions are stringently followed on the Gasparilla Island Bridge Authority Swing Bridge, and approximately 20 of them were seen walking across the bridge that morning while the bus took the rest across.

The town was abuzz with rumors that GIBA workers had turned the tour bus from All Around Charters and Tours away. What the townspeople who witnessed the incident didn’t know was that it was not Bridge Authority representatives who told the bus driver to make his passengers walk. The toll tender told the bus driver his bus was 1,300 pounds overweight, and that he would have to turn around and make other arrangements. The tender, as well as bridge authority administration, assumed the driver would leave half of his passengers off at a nearby location, drive over the bridge, then return for them.

Kathy Banson-Verrico, executive director of GIBA, was astounded to find out the group of visitors had walked across the bridge, and that the tour bus company thought that was a good solution to the problem.

“All Around Charters from Nokomis is well aware of the GIBA weight limits, as well as the various options for crossing the swing bridge,” she said. “I personally have had conversations with their dispatchers on multiple occasions. This is the same information we provide to all of our customers. Safety is our top priority here at GIBA and we would never encourage pedestrians to walk in traffic!”

When All Around Charters and Tours was contacted on Tuesday and asked if they would be offloading passengers to cross the bridge on the return trip, the dispatcher said he had already been made aware of the problem and he was going to suggest to the bus driver he drop half the bus passengers off somewhere, then shuttle them over in two groups for the return trip home.

The incident brings back to light an 800-pound gorilla in the room – how to deal with the weight restriction controversy. It is not an issue the Bridge Authority is eager to discuss, as they made clear at their last meeting when at least one board member was rather adamant that it be brought up. GIBA chairman Ginger Watkins made it clear at the beginning of the meeting that no discussions regarding weight restrictions were slated for that day, as they had more pressing matters to discuss. 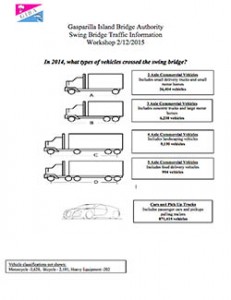 It’s difficult for many to understand why millions of dollars were spent on building new bridges if the current weight restriction of 40,000 pounds was not going to change. Many local business owners and construction contractors have expressed their confusion, and thought that was one of the reasons a new bridge system was built.

At a February public presentation last year GIBA representatives and engineers explained that the number of vehicles crossing the bridge was not likely to go up if the weight restrictions were increased to what the new bridge is rated for, which is 80,000 pounds. There would actually be less traffic, they said, because those same trucks that are coming across the bridge half-empty now to obey the weight restrictions could actually carry more in one trip to the island businesses and homeowners.

Island governances were created long ago to make sure that the truck sizes remained within the realm they are now, so no larger trucks would be able to cross the bridge either way (see diagram). Those same trucks would just be heavier.

At the meeting one man gave an example that a job that takes three or four concrete trucks to complete would take only one full truck of concrete to finish if the weight restrictions were removed. This would mean saving thousands of dollars on a job.

There are several groups with interest in the debate outcome, including the Gasparilla Island Water Association and Lee County. They have pending construction projects in the works that would become much cheaper, and the work would be done much sooner, if the Bridge Authority decides to increase the weight limit to the weight that the State of Florida deemed the new bridges able to carry, which is 80,000 pounds. GIWA Director Bonnie Pringle stated at the February meeting that the island’s new wastewater plant budget estimates were based on the weight limits being raised, and that the project would be much more expensive if they were not.

Ironically, tour buses were one of the biggest fears admitted by the crowd who attended the February 2015 meeting, though the same groups of buses have been coming to the island for years. All Around Charters has the biggest buses available for use on the island, weighing just less than 40,000 pounds when empty. The average tour bus size that comes to Gasparilla Island is slightly smaller than that, so the weight restrictions normally aren’t a problem. In special cases when tour groups going to the Gasparilla Inn & Club have used larger buses, special arrangements were made for private shuttles to come and pick passengers up.

The current weight limits were set in 1993, prior to GIBA owning the bridge. It was set because the bridge was old, even in those days, and the bridge owners wanted to prolong its life as much as possible. All new bridges built in the State of Florida (with special exceptions for private bridges) must meet with 80,000-pound capacity regulation.

The majority of people who attended the February, 2015 meeting, a good many from Boca Bay, were against changing the weight restrictions to suit the new bridges. Very few contractors and shopkeepers attended the meeting.

Currently GIBA has no plans to discuss changing weight restrictions until some time in the fall of this year.

Numbers below are from 2014 traffic patterns.