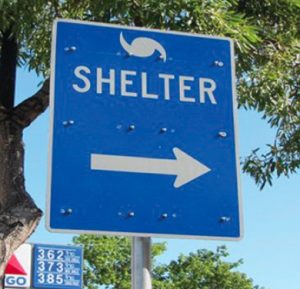 The warnings about Hurricane Irma were pretty bleak, but we had decided to hide behind those storm shutters in our indestructible concrete building and “gut it out.” That is, until the Sheriff’s deputy called and said we had to get out. But where to? After trying three other public shelters and being rejected, we finally got into one, a well-built middle school in North Port.

When you are born, your parents should sign a contract which says that you, in fact all citizens, should, in your lifetime, spend at least a few days in a shelter during a natural threat to your wellbeing. If so, we would learn several lessons: patience, tolerance, perseverance, forbearance and the ability to relinquish control to a governing body, all lessons we learned at the Heron Creek Middle School along with most of the 3,000 people at the shelter (not counting about 1,000 dogs, cats and other pets).

Our lesson in patience started with the one-hour stint standing in line outside the school in the blazing sun to register, surrounded by an array of dogs yapping away. And it never got better as we registered and then went to a classroom in the school and carved out our own space, an unoccupied table. There already was a family there with husbands, wives, grandfathers and children all speaking a foreign language. They had each other to entertain them, while we had worry and uncertainty to entertain ourselves. We established our territory as others came into the room over the next two or three hours. It was trying our patience, but what option can you have when you are on public property awaiting the eventuality of a potential natural disaster?

It certainly was a test to see to what extent we could give up control. We felt cornered, like prisoners in captivity. Like little schoolchildren, we listened to the dulcet voice of authority over the PA system telling us about curfew (9 o’clock), lockdown (10 o’clock) and every other event going on in the outside world. They made decisions, and we obeyed them.

The shelter was primarily manned by volunteers, mainly the teachers at the school. They opened the cafeteria for meals, mainly “school food” – chicken nuggets, chicken tenders and baked chicken along with packaged everything else – milk, breads, snacks, fruit. Not great, but definitely better than the food we had packed in our rush to leave our house.

We also learned how far civility can go in these circumstances, being in close quarters with a cultural melting pot. Sleeping arrangements were not luxurious, with my wife sleeping on the concrete floor, me in a chair (to the extent I slept). This school was also a tobacco- free area. In other words, NO SMOKING. Not surprisingly, not all of those in the shelter decided to heed the rules, and some sneaked a cigarette outside or left the room during lockdown, propping a pillow in the door to keep it open, or parked their cars in emergency lanes in the school’s driveway. This being said, the building was a haven of understanding, safety and survival.

The overall result is that we pledge our gratitude to the North Port schools for providing a place of shelter and manning it so effectively with teachers and others who volunteered: FEMA representatives, police, firemen and the National Guard. They protected hundreds of people more than their capacity allowed, and with controlled efficiency. It was a gratifying and eye-opening experience, but I pray that I have to live it only once in my lifetime.

Newer PostObituary Louise Wanamaker
Older PostBattening down, lucking out, counting our blessings – The worst didn’t come, but it came to our doorstep