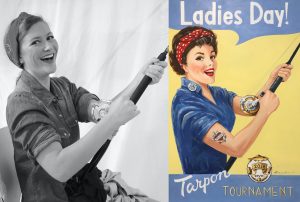 BY NICOLE COUDAL – In 2017, Brendan Coudal was considering which artwork to submit for the ‘call to artists’ for the 2018 Ladies Day Tarpon Tournament.  If selected, it would be his 8th time as the featured artist for the big event, and he was up to the task!

Brendan’s retro-style images of pretty gals, mermaids and Tarpon have been well-received by anglers over the years, but this time he wanted to submit something a little different. He decided it was time for his own version of a painting that inspired him — the 1942 image “We Can Do It” by artist J. Howard Miller — an iconic poster used as a WWII recruiting tool to attract women into defense industry jobs vacated by men at war. Miller’s painting depicts a young woman wearing a red polka dot bandana, with a determined look on her face, rolling up her denim sleeve and showing she was capable of doing a job historically held by a man.  The “Rosie the Riveter” campaign was very successful, but the identity of the real “Rosie” was in dispute for many years. . .

To get started, Brendan asked his friend Sofie Wachtmeister to model for him — Sofie lives in Sarasota, handles the marketing at Mote Marine Laboratory & Aquarium, and was excited to participate in the project.  Armed with photos and sketches, he got to work, but soon realized he needed to abandon his plan to paint a similar, determined facial expression on his gal.  As Brendan describes it, “She just looked too serious, and I know for a fact that anglers catching Tarpon are excited and happy, even jubilant!” (and if you follow Brendan’s work, you know that his gals are bubbly and make you smile).  “It just felt wrong, even though my inspiration was awesome,” said Brendan.  So, he started over, determined to get it right.  After adding his own little touch of a tattoo on her arm, hand-lettering text and getting rod/reel details just right (he even borrowed Captain Nat Italiano’s classic Tarpon rod for reference), he was pleased that he achieved his goal of making her an excited angler, one who has a “Fish On!”

In January, 2018, as he was signing his painting, the world learned that the original “Rosie the Riveter,” Naomi Parker Fraley, passed away at the age of 96.  It turns out it was herpicture snapped at the Naval Air Station in Alameda, California, while she was working in the machine shop, wearing that telltale red polka dot bandana.  That’s the photo J. Howard Miller used for his painting in 1942, and it all came full circle for Brendan Coudal, more than 75 years later, as he wrapped up his own painting inspired by that same lovely gal.

Brendan named his painting “Reelin’ Rosie” because, to him, it highlights the strength and contributions of amazing women throughout history, especially those who tackle the jobs, pursuits and sports typically dominated by men.

The original painting is oil on panel, measuring 36”X24” and framed in whitewashed wood.  She’s available for sale, so please contact the artist at 941-786-5866 for more information.

Nicole Coudal is a writer and home-chef based in southwest Florida, where she fishes and cooks with local ingredients.  She’s also a frequent contributor to Edible Sarasota, Visit Sarasota County, and ABC 7’s Suncoast View.  Read more at www.MyDeliciousBlog.com.