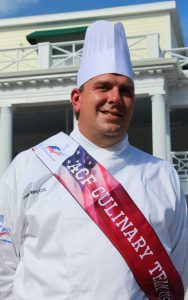 If you’re planning to attend a lunch or dinner event at The Gasparilla Inn & Club, trust that Tom Haggerty, the friendly sous chef in the kitchen, is working hard preparing some delicious items on the menu.

Tom has been chef de cuisine at the establishment for the past four years. He works with a kitchen staff of more than 70 others during peak season in Boca Grande. Those employees work at various venues, including The Pink Elephant, The Beach Club and The Innlet as well as the main kitchen.

Although The Gasparilla Inn & Club is not open for season until next weekend, Tom has been busy working for the past few weeks planning menus, putting in purchase orders and preparing to make this upcoming season a successful one.

This past July, Tom competed on a national level for team trials with the American Culinary Federation (ACF) for the Team USA United States Culinary Olympic team in Orlando. With great elation, he was chosen for a coveted spot on the team that represents the United States on a world stage in international culinary competitions. The first competition will be in Luxembourg in November, 2018.

Ultimately Team USA will end up in Stuttgart, Germany at the 35th Internationale Kochkunst Ausstellung (IKA), which is more commonly known as the culinary Olympics.

“Every four years they form teams, and then we spend the next three years training for it, so it’s an ongoing process,” Tom said.

The American Culinary Federation was established in 1929 and is the largest professional chefs’ organization in North America. The organization promotes the professional image of current and future chefs and pastry chefs through educational resources, certification and apprenticeships.

Members of the competitive teams are from all around the country and are grouped together by the organizers, so at first, they are strangers working together toward a common goal. They work individually in their own kitchens, and then when they go to the trials they all practice together.

The final teams will be selected over the next couple of weeks.

Tom first tried out for the ACF competition eight years ago, but he wasn’t selected at that time. So he kept practicing and doing competitions on his own to try to improve.

“The Inn has been very supportive of my involvement in these competitions, and I’m grateful for that,” Tom said.

The goal is to compete in the international competitions next November in Europe.

Some of Tom’s daily duties at work include ordering menu items, regularly checking the quality of the food, maintaining the daily schedules for staff and prepping for banquets and other large parties planned at The Inn.

“It takes a lot of arranging and planning,” he said. “It’s all about logistics and getting everything coordinated.”

Tom said many of the staff return each season, so the training process for new employees is pretty minimal.

“They enjoy working here, so we are lucky enough to keep many of them and have them come back each year.”

His goal is to treat and serve guests a vast variety of tasty creations, both popular choices and some original dishes of his own.

Tom is originally from Los Angeles, California. His parents moved to Kansas City for work when he was 13 years old.

It was a natural career choice for him. His first job was at a family restaurant, where he started out as a dishwasher. He eventually worked in all areas of the kitchen, and that’s when he decided to take it seriously and attend a three-year apprenticeship program through the ACF.

“I learned it was a smart choice, because almost anywhere you live, there are always job opportunities.”

After he completed the program, he worked one season at the Greenbrier Sporting Club in West Virginia, where he met Chef Seth Shipley, the current executive chef at The Gasparilla Inn & Club. Since the two were colleagues and had worked together in the past, when Chef Shipley became executive chef at The Inn, he called upon Tom to come and work as the sous chef.

At the time, Tom was working at the Ritz Carlton in Naples. Never having been to Boca Grande before, he immediately accepted the job.

“I really enjoy working with him,” Tom said. “We work really well together, so I accepted the job right away.”

Tom lives on the island with his wife, Lili, and their son, Anthony, 12, who attends L.A. Ainger Middle School in Englewood.

“It’s a great place to raise a family and we’re very happy here,” he said.

Tom met Lili about 16 years ago, while they were both attending community college in Kansas. They’ve been married for almost 13 years.

Lili also works at The Gasparilla Inn & Club in the kitchen. She helps prepare breakfast for guests at The Inn and other banquets and special events.

“She likes what she does, and she enjoys working with the staff,” Tom said.

Tom said his favorite part about living and working in Boca Grande is the community.

“The folks at The Inn take very good care of their employees, and people really seem to care about their jobs and keeping the quality and level of service as high as possible,” he said.

Tom said all of the produce and seafood ordered at The Inn is local.

“We try to use seasonal ingredients at their peak.”

When Tom is not working, he enjoys fishing and spending time with his family at the beach. He has participated in several tarpon tournaments in the past.

Anthony plays basketball and football, so Tom and Lili spend much of their spare time rooting on their son’s team. Anthony is also a Boy Scout.

“He likes to go camping – he’s an outdoor kid.”

Tom said that the “go-to book” he uses quite often for work is “The Flavor Bible.”

“It’s a reference book of seasonings and ingredients that I use to help develop new dishes or change up and add variety to classic ones,” he said. “It’s a great tool, and I’ve probably read it more than any other book.”

Tom and Lili have many relatives back in Kansas, so they try to go up every year and visit them.

The next time you’re savoring a delicious dish at The Gasparilla Inn & Club, think of Chef Tom and all the staff who work hard to make sure the experience is a memorable one.