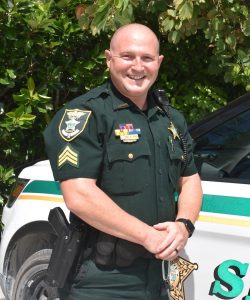 There’s a new sergeant in town, and he brings a vast amount of experience with the Lee County Sheriff’s Office.

After 13 years with the organization, Sgt. Cecil Fitch started his position in Boca Grande on July 2, 2018.

Originally from Tiffin, Ohio, Cecil worked at American Standard innovative bath and kitchen products after graduating from high school. He married his first wife when they were very young, and the company offered excellent pay and benefits.

Cecil worked in the pottery and sandstone factory for 11 years, until he realized that he really wanted to work in law enforcement.

“My uncle was a deputy sheriff, and I always looked up to him,” he said. “I didn’t have an opportunity at an early age to pursue it as a career, so when the factory closed I decided to make a career change.”

He signed up and completed a police academy program in Ohio, then decided to move to Florida shortly thereafter.

“I had some friends who lived in Cape Coral, and they said it was a nice area to raise a family,” he said. “And the winters seemed to getting longer and colder.”

So he moved to Ft. Myers in 2004 and became certified as a law enforcement officer in Florida after completing a certification program.

He applied for work in Lee County and Broward County, and Lee County Sheriff’s Office offered him a position first.

“I was determined to accept the first offer I received, and I’m really happy with the decision,” he said.

He was first based in the central district of Fort Myers and worked as a road deputy from U.S 41 throughout the city and beach areas.

He did that for three years before moving on to the Lee County Sheriff’s Office gang unit.

“Gangs were really bad for a while from 2005 to 2009, and the County received grant money from the federal government to allow law enforcement agencies to form larger gang units.”

Cecil was assigned to do community policing and make contact with neighbors where gang-related activities had been reported.

“It was very interesting work, and I actually really enjoyed it,” he said.

Part of his job was to document crimes like graffiti and other signs of gang-related activities, keep track of them, and use them to lead to the arrest of gang members.

After that he worked in the fugitive warrants unit for about eight years. He was part of the United States Marshals Task Force.

“We would try to track down anyone who had a felony warrant or documented history of being affiliated with a crime,” he said. “That was very rewarding … knowing we were taking felons off the street and seeing them sentenced and unable to hurt any more citizens.”

He was promoted to sergeant two years ago and worked as a supervisor in North Fort Myers before accepting the job in Boca Grande. He saw the job posted for the Boca Grande/Captiva vacancy online and did some research about the island, never having been here before.

“It’s been good, I really enjoy working here and am looking forward to the upcoming season,” he said. “We also patrol Sanibel, Captiva, Cayo Costa and Pine Island by boat.”

He said he appreciates how quiet the island is and said it’s a nice change of pace from his former positions.

Cecil’s wife Lindy works for Bank of America. They met through mutual friends and have been together for four years and were married last year. They presently reside in Placida.

Lindy is from Colombia and has lived in Florida since she was 13. She became a United States citizen two years ago.“It was an interesting process to watch her study and pass the test,” he said.

Cecil proposed to her in front of her hometown church in Cartagena, Colombia.

He has a son, Cecil Jr., who is also a deputy sheriff in Lee County. He works in the west district of Ft. Myers.

“They sponsored him to go through the academy, and he’s been with the County for a year.”

Cecil also has a two-month old grandson named Caden, who is the youngest of four siblings and is the only boy. His sisters all still reside in Ohio.

When asked what he likes best about his job, he replied, “working with people and being there to help.”

When he is not working, Cecil and Lindy enjoy traveling as much as possible.

“We like to see new places and enjoy going to different areas of the United States and visit other countries as well.”

They recently went up to Ohio to visit his 82-year-old mother, who beat cancer three times but was recently diagnosed with colon cancer.

While up north they visited Niagara Falls and some area wineries.

When he lived in Ohio, he did a lot of hunting, but he hasn’t done much of that since he moved to Florida.

He also enjoys golfing and fishing and he likes sports of all kinds.

“We like going to baseball and football games or just catching them on television.”

His main hobby up north was catching perch and bass from Lake Erie, but he hasn’t done too much fishing since relocating to Florida.

When asked about his philosophy of life, he said that after experiencing a few personal tragedies, he has learned to appreciate every day and try to have fun.

“The older you get, the more you learn about life and appreciate it every single day,” he said. “Life is so unique, and I’m trying to teach my son lessons I have learned throughout the years. I try to be very honest with people.”

Right now, Cecil is really enjoying being a new grandfather. His son lives in Ft. Myers, and he tries to drive down as much as possible to see the baby.

“It’s only an hour away, but the more I am around him the more I miss him,” he said. “It’s really interesting to see your kid become a parent.”

Cecil said being a police officer in this day and age has become so much more challenging than it was just a decade ago. But he said he’s very appreciative of working in Boca Grande, and proud to put on his uniform and come to work every day.

“I realize the dangers of the job, but I enjoy helping people,” he said. “We are here to serve, protect and save lives … even if it means the ultimate sacrifice in the end. It’s a privilege to wear this badge.”

Look for Sgt. Fitch on patrol around the island and help welcome him to Boca Grande.