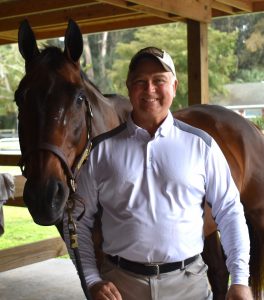 Real estate transactions and rentals at the north end of the island govern most of his days, but John Corcoran’s passion is training and competing with his retired Thoroughbred racehorse, Knightshade.

The BRC Group, LLC Realtor and Boca Grande Vacations rental manager rides Knightshade at least three times a week, and even more when he’s training to compete in an English Hunter/Jumper horse show. John has owned the 13-year-old horse for about eight years.

Communicating only via touch and sound, John and Knightshade work together as one to create an ebb and flow of beauty and balance.

They developed a friendship and have been training together in Bradenton since last summer.

“I decided to board Knightshade with Oscar,” said John, “and he is thriving there – he’s jumping higher with more confidence, and he’s stronger than ever.”

John said he respects Oscar for his professional demeanor and his knowledge of riding and training.

“I have the comfort of knowing that my horse is kept in good shape, so when I do see him, it is quality time.”

Knightshade was a Thoroughbred racing horse for years and then transitioned for one year with a different trainer to learn how to become a Hunter/Jumper horse.

John competes in horse shows within the state of Florida. This past summer he won the Grand Champion Thoroughbred Hunters in his division at Ocala Hits in Ocala, Florida.

His grandmother left Boca Grande as a teenager, and later, his parents reconnected the family to Boca Grande. John recalls visiting his great-grandmother in Boca Grande when the train was still running.

He grew up in Park Ridge, a suburban town in New Jersey located just outside of New York City. His dad, Ray, started A-1 Delivery Service, Inc. a trucking and warehouse business in New Jersey in 1982.

“My dad was a true entrepreneur who started with nothing and showed me that with hard work, building a successful business is possible,” John said.

John and his siblings, Brian and Debbie, often helped out at their dad’s company, filling in wherever help was needed – in the warehouse, on the road or in the office. His mother, Iliene, worked as a dental hygienist and later joined the trucking and warehouse business.

In 1989, his parents purchased a condominium in Boca Grande. They bought a restaurant, which was called Jams and is now Sister’s Restaurant, located at Fifth Street just east of Park Avenue. In 1998 the family decided to sell the trucking company and opened another Jam’s Restaurant off-island, which is now Villa Capri in Placida.

After years of working in the restaurant business, John decided he wanted to do something different, and he earned his real estate license.

John recalls vacationing with his family in Boca Grande every year as a young boy. He has been riding horses since he was a kid and has been

competing in shows for decades.

Speed is not favored in Hunter/Jumper classes. A steady but forward canter is favored by the judges, and a faster but steady gallop is used in Jumper classes.

Growing up, John was enticed by the four horses at his grandparents’ farm in Alabama. His Aunt Diana and Uncle Brian and Uncle Doug were also very much into the horses.

“That’s how I originally developed my admiration of horses,” he said. “I would visit them in the summer, and I started riding when I was about 13.”

And the hobby continues to be a significant part of his life today. Before he had Knightshade, John and his former horse, Thor, participated in Western competitions for many years.

Years ago, John would bring Thor to the island and ride him on the beach at the north end, before it became populated with residences.

He recalls bringing Thor to Our Lady of Mercy Catholic Church on Christmas Eve to play a part in the live nativity scene.

“He was a great horse … the best,” John said. “Everybody loved Thor.”

Then he found Knightshade, appropriately named after a stop on Alligator Alley led to the horse munching on the flowering plant nightshade (Atropa belladonna) by the side of the road. The plant is extremely poisonous to horses, but that doesn’t deter hungry ones from grabbing a bite. The transporter who was delivering the horse quickly noticed that it was suffering a reaction after a few nibbles, and he quickly stopped it from consuming any more. After that experience, John decided to name the horse “Knightshade.”

John’s parents still live in the area, and his sister, Debra Lynn Jungers, currently lives in Virginia. She is a retired major with the U.S. Army.

He has two nephews, Matthew Corcoran, 19, who is in his freshman year at the University of Florida and

Andrew Corcoran, 16, who is a sophomore at Lemon Bay High School.

The BRC Group LLC has an office located at 333 Park Avenue in downtown Boca Grande, but John’s

office at Boca Grande Vacations is located at the north end of the island at the Boca Grande North clubhouse at 6020 Boca Grande Causeway, just after passing the second bridge to the island. He sells real estate and manages unit rentals and boat dock rentals with the assistance of Dale Martin and Barbara Rajala in the office.