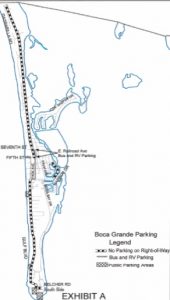 Lee County commissioners approved an amendment to the Boca Grande Parking Ordinance which includes several changes to the way things are currently done.

Last Tuesday, April 16, commissioners met at their regular meeting to discuss the proposal, which they approved unanimously. Changes include no parking on the south side of Belcher Road (primarily for fire, EMS and public safety vehicle access), bus and RV parking is now allowed only on the east side of E. Railroad Avenue between 5th and 7th Streets. According to the new amendment, RV parking is not allowed anywhere else on the island.

The amendment also strengthens the existing traffic regulation that attempts to keep people from parking along Gasparilla Road. The amendment speaks to the fact that parking along a main artery such as that creates a hazardous, congested condition endangering the wellbeing of motorists. While this is already in the ordinance, the Lee County Sheriff’s Office has been given stronger enforcement capabilities.The amendment addresses that, stating that the Lee County Sheriff’s Office has full responsibility to enforce and issue fines.

Along with a new amendment, we will also get new signage that clearly articulates these changes at the locations mentioned within the language.

According to parking panel representatives, these decisions were made based on public safety issues, not restriction of access.

The panel in the past has also been responsible for making changes and upholding existing parking regulations – such as parallel parking only on beach access roads, designated golf cart, bicycle and pedestrian walkway enforcement, and the addition of two new Lee County parking rangers on the island.

Lee County adopted Ordinance 91-35 in 1991 relating to off-street parking in the Lee County portion of the island. The ordinance “reflects discussions and meetings with the Boca Grande Parking Committee and County staff to address unauthorized parking by vehicles as well as parking restrictions to be applied to buses and recreational vehicles. These changes to parking on Gasparilla Island will have a positive impact on the parking issues which occur on Boca Grande.”