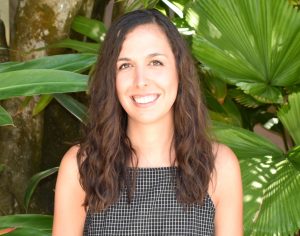 Erica Abel understands that dogs are a pretty big deal in Boca Grande.

So when she published her recent children’s book, “Minna and the Canine Club,” she planned on marketing the book here when she came to visit her aunt, Kelly Savage, for spring break.

Erica is an elementary school teacher in Grand Rapids, Michigan.

Four years ago she had a conversation with her mom, sister and aunt about writing a children’s book, and she already had the topic in mind. The four of them started the Whimsical Writers, Inc. club about three years ago.

“We love to learn, laugh together, share an adventure, operate with honor and treat people with compassion and kindness – and we all love dogs,” Erica said. “In between teaching and writing, I adore my crazy rescue dog, Minna.”

Her mom originally thought of the idea to write the book, which was published in November of 2018.

Erica’s mom, Shelli Abel, and sister, Jessica Abel, are also teachers and share a passion for writing. Erica has been coming to Boca Grande ever since she was a child to visit her aunt Karen, who lives at the north end of the island.

“When I discovered Boca Grande and saw how many dogs lived on the island, I knew right away that this was my place,” Kelly said.

The characters in the book are named after real-life dogs that the women have adopted.

Minna is the feisty founder of the Canine Club. Inspired by her teacher human, Minna decides to start her own school for the canines in her neighborhood. She loves learning and adventures. Blue is a wise old husky that protects the smaller dogs from a bully named Hugo.

Erica has established an interactive website that offers a kid’s corner, tools for parents and teacher and a club for kids and adults to join.

“The idea of the series is to help children build character,” Kelly said. “We tried to teach one character trait for children to consider in each of the books. We want kids to engage on the website and tell their stories.”

There is a page in the back of every book that lists teaching points and vocabulary and comprehension for the book. It aligns with common core educational standards most states are required to follow.

The women have partnered with the Humane Society and raise funds for the organization through donations at their events.

“Our student council raised more than $1,200 in March, and the Humane Society brought in an adoptable dog to the school for the kids to play with.”

The women said working on the book series has been challenging, rewarding and fun.

“When we started the business we said we wanted to have fun, we wanted to learn, and we wanted to create a learning environment for children – I think we’re accomplishing that, and hopefully the rest will come,” Kelly said.

The author plans to return to Boca Grande to market her book more this summer, when the second book in the series gets published.

She is hoping that some of the stores in town will offer to sell her book, and she’s also hoping to set up a book-signing event.

“We know Boca is a big dog community.” Erica said. “We would love to do some promotion on our favorite island.”

If you are interesting in helping, send Erica an email at abelerica89@gmail.com.