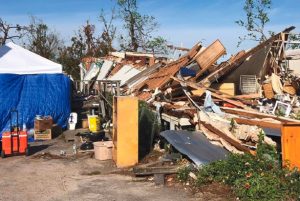 Local Realtor Kevin Hyde isn’t sure anymore how many times he has stood in front of a devastated home, trying to help the homeowner find some hope in light of a disaster … it’s just too many to count. Whether he’s doing physical labor to clear driveways or debris, helping to look for family heirlooms and salvaging what can be salvaged from a destroyed home, or just lending an ear to someone who has no one else to talk to in the aftermath, Kevin has learned a lot more in the last two years than many people learn in a lifetime.

When Hurricane Michael hit northern Florida in mid-October, it destroyed many parts of the towns of Chipley, Panama City and Lynn Haven. In the weeks that followed, Kevin and his wife Nancy got as many donations together as they could and called up their friends with the Mormon Church. They have worked before with the group – in the Keys during Irma – and knew it was the best way to help where they were needed the most.

Now Kevin and Nancy are working on a program known as Home Ownership Matters for Everyone, and they are hoping to be able to provide grants and down payment assistance for familes with children who have been left living in shelters, tents or the remains of their destroyed home.

“We find the concept of children sleeping in tents to be unacceptable, and we seek to provide stability and normalcy to the lives of these families,” Kevin said. “In this round of fundraising we are looking to raise $500,000 for the purchase of small container homes. The program has zero overhead, because everyone involved is a volunteer.”

Kevin said the need is becoming urgent, as the counties affected by Hurricane Michael are hoping to open the public schools there by January. Unfortunately, many of those schools are being used as shelters.

So, while FEMA trailers that were brought in are sitting useless because of government red tape, Kevin and many others are trying to create a new housing opportunity through the small container homes. Each home costs $25,000.

If you have any other questions for Kevin regarding an ability to volunteer or to help in another way, call him at (941) 628-4730.

At The Island School, students and their families are trying to get donations together for victims of the California fires. One of the teachers at the school, Rebecca Blalock, has family members who have suffered in the tragedy.

“Thousands have lost everything, and they are struggling just to provide their families with basic needs,” the school’s statement sent home to parents read. “As we reflect on our own blessings during this season of thankfulness and giving, the students and staff have chosen to adopt seven families.”

Items needed include clothes, diapers, wipes, storage totes, gas cards, Home Depot cards, gift cards from Costco, Target, Walmart, Amazon, etc., and some toys (see complete list at right). The drive ends on December 14. Call the school at 964-8016 and ask for Christie if you have questions.

Lastly, local lady Ronica Davis, her friends and the Lighthouse United Methodist Church of Boca Grande will be holding a bake sale on Thursday and Friday, Dec. 6 and 7, to raise money for toys and food donations for the people of Northern Florida. They are looking for baked goods, toy donations or cash.