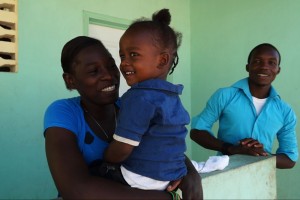 The Haiti kickoff fundraiser on Monday, Feb. 15 was well attended and very successful. Thanks to some early donations, we raised enough to build five homes – another good start. Our goal is to build 27 homes and a community center/church in Gressier Haiti. The homes will be built on the church property along with the 33 homes the Boca Grande community built last year. This land was donated by the church. Co-Chairman of Hope for Haitians Ben Scott told the crowd how grateful the Haitian people were. They came from living in deplorable conditions into a 280 square-foot home, a castle to them. Lou Fusz also shared his thoughts on the January Haiti trip. He said the thing that struck him the most was the gratefulness of the Haitian people.

Leann Chung was the guest speaker and told a compelling story of how she was trapped in her hotel room for 17 hours after the 2010 earthquake devastated Port au Prince. The hotel was completely destroyed. The rooms caved on top of each other, and four students and two counsellors in the mission group Leann was leading were killed. She had me on the edge of my seat.

Ben Scott said there are thousands of families still living in tents, and the need is as great as ever. He said that the task is so overwhelming, you have to focus on one family at a time. He went on to say that in the last six years, the Boca Grande community built homes for 200 families, three community centers, two schools, chicken and cow farms, and  dormitories for children with no families. He said that our community should be very proud of what they have accomplished. The campaign will go on through the rest of the season, and if we repeat the past years, we will complete the campaign sometime in May.

There was beautiful Haitian art work that was placed in the silent auction, and everything was sold.

The Boca Grande community can watch the progress of this campaign on the large barometer sign at the post office.