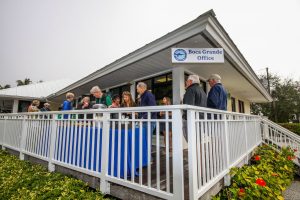 Mote Marine is hosting a five-year anniversary open house event to celebrate its efforts of outreach and marine education in Boca Grande. Everyone is invited to the event on Tuesday, Jan. 9 from 5:30 to 7:30 p.m. at the research office located at 480 East Railroad, Railroad Plaza in Boca Grande.

This family-friendly celebration will include interactive science and education booths for kids as well as hors d’oeuvres and cocktails for adults.

“Here at Mote, we are excited to celebrate the fifth anniversary of our Boca Grande Outreach Office with our extended Mote family,” said Stacy Alexander, Mote’s community relations and communications assistant vice president. “Mote’s Boca Grande Outreach Office is designed to be a focal point and resource where residents and visitors can learn more about Mote’s research efforts – particularly with locally significant topics such as fisheries and red tide. This celebration is a family-friendly, fun and informal setting where people of all ages can come out, have a great time and learn about the many ways they can help protect our oceans and the animals that call it home.”

Dr. Eugenie Clark, founding director of the research station that is today Mote Marine Laboratory, opened the doors of the Cape Haze Marine Lab – as it was known back then – in 1955.

Since then, Mote has been dedicated to preserving our oceans and the sustainability of the animals that call them home. Mote scientists are known worldwide for their achievements in marine research that help preserve ocean resources for future generations.

Mote Marine Research Laboratory staff have conducted research around the Charlotte Harbor area for more than 60 years. From the humble beginning, based in a tiny shed in a small Florida town, their efforts have expanded to include a 10-acre base campus and aquarium in Sarasota, field stations in Key West and Summerland, Florida and an outreach office in Boca Grande.

In 2013, Mote returned to their   historical home in Boca Grande with the goal of reinvigorating their partnership with the community to conserve and protect this famous estuary. Mote believes that strong science-based conservation programs will play a critical role in preventing further  decline in the Harbor’s health and in sustaining and restoring historical fish populations, according to a press  release issued by the organization.

The anniversary celebration is sponsored by Northern Trust. RSVP is required.