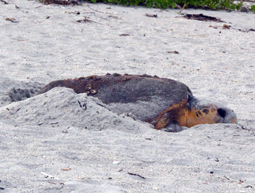 It’s very unusual to see a sea turtle stop off at the beach in the middle of the day to lay her eggs, but that’s exactly what happened on the beach around 4:30 p.m. on Friday, July 22.

Approximately 25 spectators gathered on the beach to take photos and videos of the nesting sea turtle. All kept a safe distance and refrained from any quick, sudden moves that mIght have frightened the turtle and disrupted the process.

“She seemed completely oblivious to the crowd that gathered – probably because everyone kept a respectful distance and remained quiet,” turtle patrol volunteer Melissa Csank said.

Usually sea turtles come ashore to lay their eggs during the overnight hours. The clouded skies and gusty winds on Friday evening made the temperature feel like it had dropped ten degrees.

“I think that’s what could have caused this. The cooler weather and lack of sunshine might have made it seem like it was night,” Csank said.

By 5:18 p.m., the sea turtle had finished coving the nest with sand mist and headed back down the beach toward the water. “I’ve been here for 35 years, and this is only the second time I have witnessed this,” Csank said.

On average, sea turtles lay 110 eggs in a nest, and average between two and eight nests each season. The eggs will hatch in 45 to 60 days after a nest is covered. Only 1 in 1,000 hatchlings will survive to adulthood. They can live to be more than 100 years old. Hatchlings face many predators, both on their way to the water and once they get into the ocean. On the beach, birds, crabs, ants, bobcats, raccoons, coyotes and even unleashed dogs are common threats to nests and newly hatched turtles. Once in the ocean, they face a host of marine predators until they reach adulthood.

If you find hatchlings on the beach, it is recommended you let them crawl to the ocean on their own, maintain a safe distance, and make sure lights are off so hatchlings don’t become disoriented. Do not remove them from the nest. If they are wandering away from the ocean or found during the day with birds circling, call the Florida Fish and Wildlife Conservation Commission at 888-404-FWCC for assistance.

The BGSTA is actively looking for volunteers. Training and supplies are provided. Donations for the nonprofit organization are always appreciated. For more information, go to facebook.com/seaturtleawareness to find out more details.