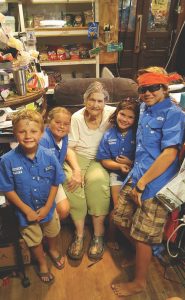 It’s very hard to put into words what Isabelle Joiner meant to the heart and soul of Gasparilla Island. She didn’t just live on the island, and she wasn’t just raised on the island. She truly was the island.

On the morning of June 20, 2018, when she passed away, a tangible feeling of loss hung as heavy over this little island as the June humidity. It still hasn’t left … it may never go.

Born Isabelle Louise Whidden on February 12, 1934, she took her first steps on the old boards of the dock at Whidden’s Marina. She never left once she came back from the Sarasota hospital she was born in until just a few days before she died.

Her parents, Sam Whidden and Alice Leslie (Gregory) Whidden, were two people who were different in many ways. Leslie was a refined lady’s helper from Boston, and Sam was a rough-and-tumble local Grove City boy. But they shared three common loves – Boca Grande, their family and fish. 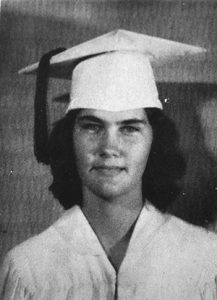 The Whidden family ran the old marina that used to be called the Red Gill Fish House (where the Gasparilla Island Maritime Museum is now), and Sam renamed it Whidden’s. The Whidden’s we know today was considered the front half of that old marina back then.

Whidden’s back in the day was not only a marina, it was also a boardinghouse for captains and anglers, and there was a small restaurant and dance hall in the building as well.

Isabelle was the first child of Sam and Leslie. When she was old enough to walk she went to work, handing out sodas and tending the gas hose. Her sister Barbara was born just a year after her. In 1937, when the girls lost their mother and Sam lost his wife, he began the business of raising two young girls on his own. He closed the restaurant not long after Leslie died, and the dance hall for a time was only used for special occasions. He began stocking his shelves with more grocery items, and the marina became popular as a little “stop and shop” store. 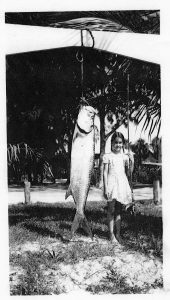 When World War II came to the island, servicemen would come to Port Boca Grande and eventually find their way into town. Sam reopened the dining room and the dance hall was in full swing again. He also added slot machines for their entertainment. Isabelle had memories of diving under those slot machines when the air raid sirens would go off, and she remembered people on the rooftops of buildings downtown with binoculars and spyglasses, looking for enemy submarines in the water.

The beginning of the Whidden’s menagerie took place when Isabelle was young. Her father, who at one point had 13 cats, three dogs, ducks, chickens, turkeys and rabbits, took in a wayward monkey named Chico. Chico lived at the marina with the Whidden family for 25 years. Eventually the ever-popular Ziggy the Piggy came to live there as well, and now there are a few goats. 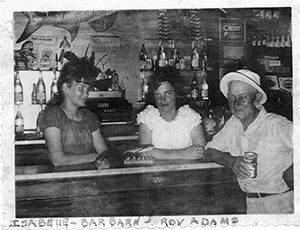 Even after Isabelle married Donald Joiner she still stayed around the marina to help out, particularly with the bookkeeping. They originally lived in the North Village, but eventually they moved that little house all the way to Tarpon Street, and Isabelle’s son Wayne lives there now.

In 1978 Sam Whidden passed away. Isabelle and her sister inherited the marina and Isabelle became the full-time manager. She began holding Saturday night dances again and brought in live entertainment, as well as pool tables.

It was during this time when Isabelle, now a full-grown woman, began to establish her place as a benevolent soul who would help anybody at any time … just as her dad was. If someone needed a place to live, she would help him or her find one. If someone was hungry, she fed them. The marina – like Isabelle’s heart – was always open.

Isabelle also started bringing the shrimp boat to Whidden’s decades ago. She would put the sign out that said, “Fresh eating shrimp,” and the people would come in droves … and they still do to this day.

When offers started to come from the millionaires and billionaires who wanted to buy the Whidden’s Marina property, both Isabelle and Barbara always refused. In fact, in an interview with the Boca Beacon in 1999 she was quoted as saying, “I wouldn’t put a paint brush to this wood. I like it this way.”

Isabelle stood on tradition and family. She honored her father’s memory in little ways – such as leaving the moonshine jugs over the old double doors. Many of the old signs still hang on the walls at Whidden’s, and the décor has hardly changed a bit in much of the old building. The marina was her lifelong safe place, her comfort zone, just as it was for so many of the people who grew up and lived year-round on the island.

When she was asked about famous people who might have visited the marina, she w 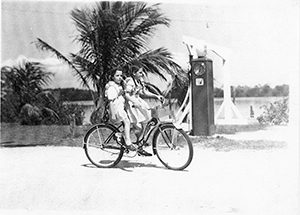 ould shrug and say, “We used to get a few of them in here, but I can’t remember who without looking at the guest book.” The people who meant the most to her were the ones who lived in her house … and down the road. She had an intuitive sense about people; she could differentiate the good eggs from the bad pretty quickly. Mostly, though, she loved everyone who loved her family and her island.

And yes, it truly was “her” island. Until June 20 no one had more claim to it, and no one who knows anything about this island would contest that. This smart, honest, generous, funny, genuine woman will be missed more than all the stars in the sky on a June summer night over the Pass, and all the tarpon in its waters.

Newer PostVisitation, funeral announcement for Isabelle Joiner
Older PostFrom the Miccosukee in the Everglades to Boca Grande and beyond people are asking … where is our clean water?