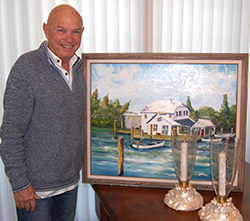 BY SUSAN HANAFEE – What do the United Methodist Women’s Strawberry Festival and Boca Bargains have in common? Artist John Mitchell, Sr. for starters. Mitchell is a frequent patron of Boca Bargains and a generous donor to the Strawberry Festival, which will be held on March 5, starting at 9 a.m. at the Community Center grounds. His contributions for the Festival’s silent auction this year include a painting of an early Whidden’s Marina and etched hurricane candleholders from the 1930s – both with ties to the Bargains’ shop.

The rustic frame for the Whidden’s artwork was purchased by Mitchell from Boca Bargains and then cut down and reassembled to fit the oil. “I thought it worked well with the painting, which shows Whiddens when the ballroom was active and the marina had the old-style gas pumps and rowboats,” he explains.

The candleholders are thought to be from a beachfront property, although Mitchell says he can’t confirm their origin. He bought them at Boca Bargains and covered the brass-and-marble bases with delicate shells and craft-grade cultured pearls, creating a stunning pair for an island home.

Mitchell’s weekly shopping almost always yields treasures, many of which have ended up benefitting needy women and children served by the proceeds from the Strawberry Festival. “From one charity to another. It’s a double benefit,” he says.

Mitchell isn’t the only painter who has generously donated to the 2016 Strawberry Festival’s silent and live auctions. Works by Jane Carlson and Del-Bourree Bach 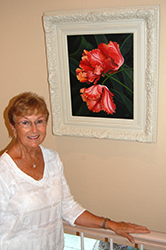 will be featured in the live auction. Watercolors by Marlene Cox, Sandra Goolsby, Carolyn Humke, Melinda Theis, Winnie Smart and the late Indiana artist Paul Sweany will go to the highest silent auction bidder, along with oil paintings by John “Rocky” Dedrick and Pam Hannah.

More than 50 articles from local businesses will be part of the silent auction. Fishing trips by some of the best local guides have been donated, along with golf outings, tennis lessons, lunches and dinners at favorite restaurants, gift baskets from island shops, condos in tropical locations and much more.

Festival organizers are encouraging donations for the Festival’s bargain, books, boutique, Dazzling Digs and Go Fish (children’s toys) areas. They can be dropped off at the Methodist Church office at 325 West 3rd Street, Monday through Thursday from 9 a.m. to 4 p.m. On the Thursday and Friday before the event, contributions can be delivered to the community center starting at 9 a.m.