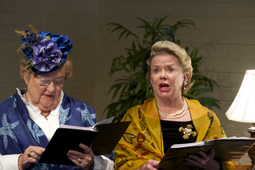 You’re invited to a party this weekend at the Crowninshield Center, when Oscar Wilde’s “An Ideal Husband” begins Royal Palm Players’ season of fun. This year’s theme is ‘The Battle of the Sexes,’ and this pithy comedy proves that both sexes are capable of intrigue, blackmail and corruption, as well as forgiveness.

As you sit in the audience enjoying a glass of wine at RPP’s first production in a cabaret setting, the guests in this charming production arrive. London’s elite gathers at the fashionable home of Sir Robert Chiltern, Britain’s Under Secretary for Foreign Affairs. Sir Robert (Hal McCombs) and his wife Lady Chiltern (Ann Fletcher,) are celebrated for their fabulous parties. An unexpected guest, Mrs. Cheveley (Sally B. Johnson,) arrives and attempts to blackmail Sir Robert into supporting her scheme to build a canal in Argentina. She alone knows that in his youth he sold a Cabinet secret about the building of the Suez Canal, which was the basis of his entire fortune.

Poor Sir Robert. This will ruin his career, as well as his marriage. His morally inflexible wife has said she can only love ‘an ideal husband.’ Lady Chiltern’s love depends on having a spouse she can worship in public and in private. In a plot filled with twists and turns, Lord Goring (Kris Doubles) saves the day by blackmailing the evil Mrs. Cheveley into giving him the evidence of Sir Robert’s crime. A happy ending ensues. Lord Goring proposes to his ‘ideal’ mate, Miss Mabel Chiltern. Sir Robert does not vote for the fraudulent scheme in Parliament. Lady Chiltern forgives her husband and resumes her worshipful love.

Only the conniving Mrs. Cheveley is denied true happiness as her opportunity to blackmail her way into wealth disappears. As in past years, the season’s first show is a staged reading. This provides less-experienced actors with the opportunity to work on a big production without the six to eight weeks of rehearsal most productions require. With less than two weeks of intense rehearsal, Meryl Schaffer, RPP’s new artistic director and this show’s director, still managed to instill the cast with a strong sense of comedic timing. Meryl’s staging is modern, while her costuming is elaborate. 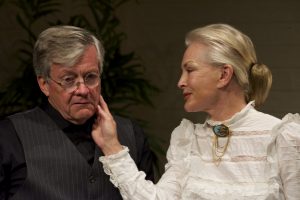 This reviewer was fascinated by the beautiful fascinator hats each female cast member wears. Surprisingly, Ms. Schaffer and Cori Hane Palmere, a new RPP star, created these beautiful Victorian hats. Alex Newberry, a founding member of Royal Palm Players, brings us back to London in 1895 with wonderful sound and lighting. As for the stars of this ‘ideal’ show, there are many beloved RPP actors and many new faces, too.

Hal McCombs is Sir Robert, the ideal husband who falls from grace. Although Boca Grande audiences are more familiar with his work as a singer/dancer/actor in “Oklahoma!” and “Hello Dolly!” Hal proves he is also a comic. His grasp of the frothy language is well matched in scenes with one of our island’s favorites – Ann Fletcher. Even when she is chiding his lack of perfection, she remains charming. You can feel his fear as she threatens to withdraw her love.

Both Hal and Ann have strong scenes with the devilish Mrs. Cheveley, played by Sally B. Johnson. A flirtatious, almost girlish performance delivered by Sally manipulates every male she meets. In stark contrast is the malevolent side her character exhibits only to women or those she is incapable of controlling. Watch for the moments when she threatens Ann by towering over her. It is a very funny bit of staging that reminds the audience that even dramatic moments can be treated less seriously. Kris Doubles returns to our stage as Lord Goring, the dandified son of the Earl of Caversham, played by Jim Sullivan. Jim’s disappointment at his son’s lack of direction is hysterical. Kris’ refusal to do anything of worth except change clothes five times a day makes his turn as the hero of this very funny play even more surprising.

Cori Hane Palmere is terrific as Miss Mabel, the current object of Lord Goring’s affection. The dialogue the three share is some of the funniest Oscar Wilde ever created – and they do it justice. (Watch for the twinkle in the Earl of Caversham’s eye as he teases Miss Mabel.) Carol Elwood and Margaret Norvell are both experienced actors who recently joined RPP. Carol was featured in “Hello Dolly!” and Margaret in RPP’s ArmChair Theater (ACT). They are excellent additions, capable of making the audience laugh with just a raise of their eyebrows as they gossip.

Barbara Stirling, another new player, began in ACT last season and got bitten by the acting bug. As Lady Markby, she unknowingly starts the blackmail when she arrives at the party with her friend, the evil Mrs. Cheveley. Barbara has the stage presence and understanding of Wilde’s language usually seen only in actors with years on stage. On the other hand, Dutch Hiedsieck is a completely new performer. Dutch plays two pivotal roles and seems to be having a marvelous time on stage. And last but not least is the very funny David Jenkins starring as Mason, the butler. His deadpan delivery as he announces the guests gets a big laugh every time.

In the interest of fairness, I must confess that I am the producer of this show. Does that mean I have no objectivity and should not be writing a review of “An Ideal Husband”? Of course not! In truth, I have watched this cast grow into their roles and have laughed night after night. You will, as well, whether you enjoy a glass of wine during the performance or not. It is, in fact, an ‘ideal’ beginning to a very fun season.

Tickets are $25 each and are available at the RPP office at the Boca Grande Community Center or by calling 941-964-2670 or online at royalpalmplayers.com. Since “An Ideal Husband” is performed in a cabaret seating at the Crowninshield House, feel free to bring a bottle. This Friday and Saturday, November 11 and 12, the show is at 8 p.m. On Sunday, Nov. 13 the show is at 5 p.m.