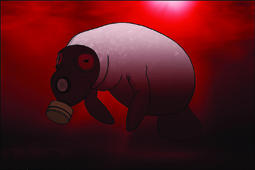 Coughing, sneezing and runny noses were common annoyances for islanders this week, after thousands of dead fish washed up on Charlotte County beaches. The irritations were the result of a red tide bloom that started on Friday, Sept. 23 and is still present in area waters.

As the wind started to shift south, the bloom became evident on Boca Grande beaches. When Florida red tide algae cells are present in concentrations above normal levels, people can experience varying degrees of eye, nose, and throat irritation while near the shore or in the water. When a person leaves an area that has traces of red tide, symptoms usually go away.

Volunteers with the Boca Grande Sea Turtle Association reported seeing small dead fish on the beach on Wednesday afternoon. According to the Florida Fish and Wildlife Commission, a bloom of the red tide organism, Karenia brevis, has been observed in samples collected from Charlotte County and Lee County. Red tide releases a toxin, an algal bloom containing a higher than normal concentration of a microscopic alga (plantlike organism) in the water that is deadly to wildlife.

Hayley Rutger, content development manager at Mote Marine Laboratory, said that the same toxin is released into the air. “If you have asthma or something like COPD, you’re going to be more susceptible to the toxins,” Rutger said. Kaitlyn Fusco, public relations manager at Mote, said evidence does not suggest that the Siesta Key sewage spill during Hurricane Hermine, a discharge of more than 3 million gallons of partly treated sewage into the water, caused the initiation of this bloom. “It is possible that the discharge provided some nutrients to the bloom once it had developed and moved to the coast, but the exact significance of the discharge — in the context of many other potential nutrient sources in the area — is unclear,” Fusco said.

Rutger added that the red tide algae occur naturally in the Gulf of Mexico.

Blooms normally start offshore, away from coastal sources of nutrients. However, blooms carried close to shore have the potential to use natural and man-made nutrients for their growth. Charlotte County beaches had high concentrations of fish kills as far south as Englewood Beach.

As of Sept. 29, water samples confirmed elevated concentrations of Florida red tide algae along much of southwest Florida’s coast.

In partnership with the Florida Fish and Wildlife Conservation Commission, the Collaboration for Prediction of Red Tides program (CPR) at the University of South Florida offers a new Harmful Algal Bloom (HAB) tracking tool to help federal and state agencies monitor and manage red tide blooms on the west coast of Florida. The model then generates 3-day forecasts of the bloom trajectories in the estuaries and inlets, and the data are available on the FWC website.

Florida Healthy Beaches reported that most people can swim in the water where red tide has been detected, yet it can cause skin and throat irritation and burning eyes. You can report any health-related issues to floridahealth.gov.