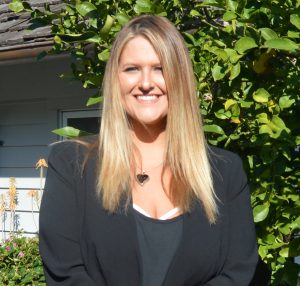 Sierra Cunningham has been helping people on the island look their best for the past nine years. She’s a full-time hair stylist at James Griffith Salon at the Gasparilla Inn Beach Club, and if you’ve ever been a client of hers you understand right away how much she loves her job.

“I really enjoy coming to work every day. Once I drive over the bridge I can’t stop smiling. And my clients are the best,” she said. Sierra was born in Baltimore, Maryland and grew up in Ocean City, near the eastern shore of Maryland. “I’ve been very lucky. I’ve always lived the beach life,” she said.

Her parents, Susan and Steven Bledsoe, moved to Englewood when she was 16 and she completed high school online via Florida Virtual School.

“They literally picked an area on the map and bought a house online. They were through with the winters,” she said.

After receiving her diploma at 17, she started beauty school in Port Charlotte at Charlotte Vocational Tech School.

Sierra thought she wanted to be a lawyer when she was young, and her idea was to go to beauty school to learn a trade that would help her make some money while attending college, but she ended up loving the profession so much that she decided to stick with it.

“I didn’t think I could make a career out of this, but now I can’t see myself doing anything else,” she said.

While attending school, she worked at Lickity Split Cafe in Englewood, where she continued to work part-time for many years. She tried working at a couple small salons in the area, but they didn’t seem to be the right match for her at the time. It actually made her doubt her career choice. Then a friend told her about an opening for a stylist at James Griffith Salon in Boca Grande, and she applied. She started working as a stylist on the island when she was 20, and has been working at the salon for almost nine years. Sierra said there are many things she loves about her job, starting with her boss, James.

“He is just the greatest guy to work for – we are excited when he comes in every day – he’s cool and exciting and positive,” she said.

“We have an amazing education system here, and The Inn is really amazing … they are so good to us.” Sierra visited Paris in May along with several other stylists from the salon.

“We’re trained in French hairdressing. James is one of the first salons in the nation who has a French hairdressing salon. We’re all trained by French stylists; we went for two days of training, and we learned by watching their techniques because they barely spoke any English,” she said.

Sierra is the head educator at the salon and enjoys teaching classes every Monday for all the new stylists.

“Every month I introduce something different. We always get new training. I learn when I teach, so it’s really a win-win situation,” she said.

Sierra said she stays very busy with work all year long between taking care of the island residents, guests and doing hair for the many wedding parties that are held on the island.

“She’s done a lot of great things and I was proud to nominate her. She’ll be coming with us to Chicago in April to be a part of the Emerging Leaders organization within our industry,” Griffith said.

There are eight hairdressers at the salon, and all of them rotate between the island shop and the other two James Griffith salons in Venice and Sarasota.

“I love my job because I like making people look pretty and making them feel good about themselves. I have the coolest job. People can walk in and be in a grumpy mood, but after a pretty haircut and style they leave with a little pep in their step,” she said.

Sierra met her husband, Chuck, in Venice when he was staying in the area to help open up a dance studio. Chuck is a professional ballroom dancer and competes regularly. He also as teaches dance at a studio in Sarasota. “I wasn’t a dancer but I’m learning. It’s a lot harder than I thought, much harder than it looks,” she said.

Chuck has a professional dance partner and they compete twice a month all around the country.

“They often get second or third place at the competitions, so they’re very good,” she said.

The Cunningham’s have one daughter – Shaelyn – who is 5.

“She’s a mini version of myself. She’s so funny. She’s a little diva because she has a hairdresser as a mom and a dance instructor as a daddy – she has no much personality for a 5-year-old,” Sierra said.

The family currently lives in North Port. Sierra has an older brother, Steven, who works in the construction business with his dad in Sarasota. Her mom worked as a nurse for many years and is currently working at an assisted living facility in Englewood. When she is not working, Sierra is a big fan of the beach and likes to go whenever she has the chance.

“We love going to the drum circle on Sunday nights at Englewood Beach and my daughter hula hoops while the people play drums. It’s really cute,” she said. The family also enjoys taking random day trips.

“We’re so lucky to live where we live. There is always something interesting to do or new places to explore.”

Sierra said she really loves traveling and although it’s hard to find time for these days, she also enjoys having a girl’s night out once in a while.

She is a big fan of rainy days, but has a disdain for traffic. When asked about the person she admires most in life, she said her mom, because she is such a strong, positive woman.

“She is the most positive person that you could ever meet. She is always smiling and complementing others. Whenever she walks into a room you can just feel the positive energy. She is my role model.”

Sierra works Monday through Friday at the salon near the beach. If you are ever in the mood to get pampered, call the spa to schedule an appointment.