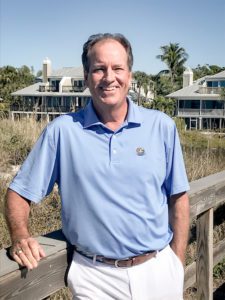 BY MARCY SHORTUSE – Scott Cotherman is a man with a professional past that many could only dream of. He has worn many hats, received many kudos for his accomplishments and has led some of the most impressive corporations in the world to become more successful through his actions. But if you ask him how he would describe the profession he has since retired from, one particular story sticks in his mind that seems to sum it up.

It was when his daughter, Stephanie, addressed her sixth-grade class one day when the teacher asked the students what their parents did for a living. She stood and very succinctly said, “My dad gets people to buy things they don’t really need.”

Scott and his wife, Jinny, currently live on the north end of the island, in Sea Watch, and Scott works with the Coral Creek Club on the membership committee. Jinny is part of the Boca Grande Woman’s Club and is volunteering as a committee member for Boca Bargains. Their children are grown now; “little” Stephanie is now 33 and works in consumer advertising at Edelman in Chicago, one of the most renowned marketing firms in the world. Their son, Doug, is 31 and is involved in a scrap metal business with a family friend in the Chicago area. Their youngest, Angela, who is 28, works with an event marketing company in the Chicago area. Doug was married here on the island a year ago, and Angela just got engaged on the beach in late December.

It’s no coincidence that two of three of Scott and Jinny’s children went into marketing. Scott was only in his early twenties when he got into an executive program at a medical supply company in the human resources field, but it was there it became apparent to him that people who lead organizations usually have a sales background, not one in human resources. From there he eventually transferred into orthodontic sales and modeled what were then known as futuristic “invisible” braces. He was paid $1 to model his mouth for the company, and one day went to a photo shoot at an advertising agency for the account. That, as it turned out, was a day that changed his life.

“I got to know the people there; they were very funny, very smart and working that day on things that most people don’t see in the marketplace for years into the future,” Scott said. “They started inviting me to focus groups, and I was able to hear the physicians that I used to call on in sales talking about the product I had once sold them. I decided I liked advertising more than sales. That’s what started my advertising career.”

The great Jack Fisher was his mentor in Scott’s early days of advertising, and it was a true coincidence when the words “Boca Grande” came up in conversation between the two many years later.

“He had been a resident here for many years and I didn’t even know that,” Scott said. “At that time we had been coming here for five years, and it came up one day in conversation. I thought there was no way he was talking about Boca Grande, I thought he must have said Boca Raton. He said, ‘Yes, Boca Grande.’ Jack and I today are great friends, they live nearby now and we see him and his wife often. I succeeded him in his old job in the 1990s, I became president and CEO of that agency, which later became global.”

That job was at Corbett Accel Healthcare Group, part of a worldwide network of TBWA Worldhealth. At that time they were part of Omnicom group, the largest holding group of marketing and advertising communications around the world. In 2015 Scott was inducted into the Medical Advertising Hall of Fame (MAHF) by the organization’s membership. When he was inducted he was only the third CEO in the company’s 54-year history, and his induction marked the first time any agency had three generations of CEOs as members of the MAHF. The other CAHG inductees were Frank J. Corbett – the company’s namesake – and, of course, Jack Fisher in 2003. Scott retired from CAHG in 2014.

Scott grew up in Muncie, Indiana to a father who was a pharmaceutical sales rep and a mother who was part homemaker, part entrepreneur. Scott’s father spent his days calling on local physicians and pharmacies and hospitals, and Scott recalls time spent unloading UPS trucks full of medical product samples that would be stored in a locked cabinet in their garage. His father would give those to physicians during sales calls.

One of the most unique things about Scott’s upbringing was his education. Muncie was famous because it was branded “middle town USA” through a nation-wide research study. It was a place that researchers at the time profiled as being the prototypical kind of American town in the USA. When Scott lived there the population stood at about 120,000 people, and Ball State University made up a big portion of that population.

“My parents moved there when I was going into first grade,” Scott recollected. “I spent all my childhood in Muncie, and I went to Burris Laboratory School from first through 12th grade. All classes were at one single school, and there were about 700 students overall. Ball State was known and founded as a teacher’s college. We were grouped with several different grades, and that was significant in my education, being with kids at different levels of learning. Many of the teachers had PhDs. Many of them had children who went to school at Burris as well, so I was in school with the children of many of these academics. My wife reminds me all of the time that I got a private school education in a public school setting. I really benefited from that.”

It was during his education at Burris when he got his first taste of what was to come in his future. Scott said the older students were allowed to determine their own curriculum for weeks at a time, and he chose to work alongside his father. Dressed in a suit and tie, he would ride in the passenger seat of the car and visit doctors and hospitals, pathology labs, even mental hospitals.

“That was quite an experience for a teenager,” he admitted. “I have to say, with no slight to the physicians, I often found that the doctors were crazier than the patients. It was a very interesting environment. Doing that with my dad was nice because he was away from home a lot, and it was good to be able to spend that time with him.”

While Scott participated in a variety of sports, he was also a bookworm. His mother was an avid reader, and he believes that a lot of his intellectual curiosity came from his experience at the laboratory school, and from his love of reading.

Scott left Muncie at the age of 21 to go to graduate school at the University of Chicago. With one younger brother and two younger sisters at home and Ball State (where he completed his undergraduate education) right around the corner from his home, he needed a break.

“People ask where I grew up, and I tell them I grew up in Indiana … but then I escaped,” he laughed. “I hadn’t been on an airplane until I was 21, when I went to Washington D.C. If you can call it a sheltered life in a place of rigorous academic expectation and independent thinking, then I lived a sheltered life. I had no big city experience until I moved to Hyde Park, at the University.”

Scott’s love for learning was apparent again in the fact he pulled a double major at Ball State, in business administration and psychology, with a minor in political science that was almost a third major. He went to classes through each summer he was there and was, as he refers to it, “a martyr for increased academic experience.”

But he also wanted to get out of the house. Staying in classes year round afforded him the opportunity to live at a fraternity, and he jumped at the chance to join. The Sigma Chi fraternity became extremely important in his life. He met his wife, Jinny, at its headquarters in Evanston, Illinois while she was there with her sorority.

“The fraternity was a very important influence on me,” he said. “It not only allowed me to get out of the house, I happened to be there at a time that there was a group of average to above average men who came together as a collective organization to do extraordinary things. I was able to be part of that. The things we were able to do in those four years were pretty extraordinary and had a great impact on me. I’ve received a number of awards based on my accomplishments through them, and it continues to be important to me now in finding a variety of scholarship and educational opportunities for students at the university, so they can continue their education.”

Scott was drawn to the University of Chicago because there he was also allowed to make his own curriculum. Drawing upon everything he had learned at Burris and was involved in at Ball State, he was able to put his own program together, and took classes at their business school, and in social science with a specialty in organization studies. When he graduated, he said, he was most equipped to go into human resources, and secured a job with a hospital supply company in Evanston. He worked there, in human resources, for a year and a half before the rest of his career took off.

Scott’s passion for golf eventually took him to the Coral Creek Club, and to the Royal Society of Soon-to-be-Ancient Golfers (a.k.a. STAG), which was founded in 2008 on the occasion of his 50th birthday. The mission of the club is to play the top 100 public access courses in the U.S. before each member’s demise. There are 40 men who make the annual trip, competing for crystal trophies and the right to have their name inscribed on the STAG Tournament Winners Plaque. The golfer who had the worst score on the previous day has to wear the King’s Kilt throughout their round of the present day’s competition. At Bandon Dunes in 2010 Scott won that dubious honor. 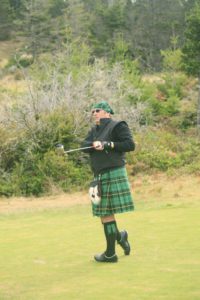 An important companion organization for the members of STAG is the STAG Foundation, which is dedicated to growing the game of golf among America’s youth in the cities where they hold their annual trip.  Past beneficiaries have been the First Tee program, Youth on Course, and the Carolinas Golf Association’s youth golf program, among others. Florida courses visited include Streamsong Resort (Bowling Green) and World Woods (Brooksville).

Scott loves the village feel of Boca Grande, as well as the people.

“Some of the most amazing people from all over the country are here,” he said, “and they’re not showy, they fly under the radar outside of their business pursuits, and they are significant contributors to the village.”