Island artist Linda Wolcott remembers what it was like at a very young age to come for the first time to visit Boca Grande.
She arrived on the island via train with her parents and her two older sisters when she was just four years old. 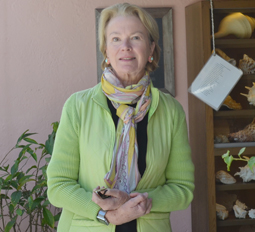 “I remember holding my mother’s hand and getting off the train the first time we arrived at the old railroad depot,” she said. “And now I live just right across from the same place, practically, that I got off at when I was four – so I really haven’t moved around much. I’ve come full circle.”

Linda said it’s really amazing how she ended up right back where she started.
Her parents bought a house in Boca Grande and were seasonal residents for many years.
“Then after my father died, my mother started living here full time,” Linda said.

Linda met her husband, Frank, on a beach in Connecticut 30 years ago. She recalls that she was staying with some friends for the weekend during the summer.
Frank was living in Connecticut when they met, and an immediate love connection was made that summer. The couple were married in Boca Grande the following February.
Frank pursued a career in the investment business up north. The couple vacationed annually in Boca Grande for years.
Linda and Frank recently celebrated their 30th wedding anniversary. They spent time celebrating their special day in Miami.

Linda has been a painter for as long as she can remember. She enjoyed experimenting with art as a child and later attended art schools in Paris, New York and Connecticut.
After attending art school in New York, Linda accepted a job there and worked in fashion and jewelry design.
“I designed and created different kinds of jewelry and sold it in a New York gallery,” she said. “I really enjoyed it.”
Linda said she mainly designed necklaces, bracelets and a lot of earrings.
“I worked with a lot of twisted beads with various carvings on them, and what they call semiprecious stones,” she said.

After doing high-fashion design, she started doing some jewelry design on the side and that’s how she initially became interested.
And then, after getting married and moving to Connecticut, she went back to art school again.
“I just wanted to continue studying and take more classes. There was a very good art school there, and I had the time to do it,” she said. “There is always something new to learn.”
Her favorite medium for painting is in oil.
“I will also do pen-and-ink and some watercolor and pastels a bit, but mostly I like working with oil,” she said.
She said pen-and-ink is the quickest of all the forms she has experienced, whereas oils take a considerable amount of time.
“Some people find that watercolor is much harder, because it’s not very forgiving. The thing about oil paint is that you can always correct it. You can go back and paint over it or make changes to it, whereas with watercolor, once it’s done it’s done,” Linda said.

To this day, Linda estimates that she has done “a lot” of paintings.
“We recently moved in Connecticut and I decided to totally clean out my studio there, and there was a lot of canvas to go through,” she said.
Linda and Frank have a summer home in Salisbury, Connecticut and spend most of the winter months in Boca Grande.
They have a 14-year-old dog named Macao.
“She’s a Portuguese Water dog, and she’s named after the Portuguese colony in China. She really likes the water,” Linda said.
Linda and Frank have been coming to Boca Grande for 30 years.
“I’ve always wanted a house in the village, and when my mother died, my sisters and I inherited her house,” she said.
She stayed seasonally in her mother’s home for several years.

Linda and Frank knew they wanted a home in Boca Grande, so they purchased one here five years ago.
“When one became available we grabbed it, and we are so happy there – we just love it,” she said. “We were really, really lucky that we found just what we were looking for.”
Aside from painting, Linda enjoys swimming, walking and bicycling around the island and cooking.
She took Indian cooking classes at one point, and she enjoys experimenting with different kinds of foods.
“It changes. I will have fads that I go through, when I want to experiment with new types of foods,” she said.
She also enjoys listening to audio books on tape.
“I usually have a couple going at any time. I keep one in my study and one on my bedside table,” she said.

Linda is originally from Long Island, New York.
She has two sisters. One lives in Bermuda and one lives just outside of New York City.
Linda has gone to visit her sister in Bermuda, and she enjoys visiting the island. “It is really nice, but it can be quite chilly there around Thanksgiving, and that’s when we’ve gone quite a few times to see her,” Linda said.
Frank is Toni Wolcott’s brother. Toni is also a local oil painter. The sisters-in-law share many similar interests and often spend time painting together.
In February, Linda and Toni teamed up with another local island artist, Jack Horner, and the trio presented an art show. They hold an art show every other year together. They recently held their show at the Boca Grande Art Center, where each of them had about 12 to 15 pieces of art on display. According to the artists, the most recent art show was well attended.

Linda is an active member of the Boca Grande Art Alliance. Both Linda and Toni will have sustaining exhibits on display at the gallery at the Art in Bloom 2016 Spring Art Show, which is today (Friday, March 18), tomorrow (Saturday, March 19) and Sunday (March 20) from 10 a.m. to 5 p.m.
The show will feature artwork by the Boca Grande Art Center exhibiting members and floral interpretation by the Boca Grande Garden Club.
The art center is located at 236 Banyan Street on the island just off of Park Avenue.
The work of nearly 30 artists will be on display. All exhibiting artists must meet certain criteria to be a part of the show.
There will also be a silent auction to benefit the scholarship fund in the Crowninshield House this weekend. The auction will close at 4 p.m. on Sunday, and winners will be notified by phone.
If you are interested in learning more about Linda’s work, you can email her at llwolcott@sbcglobal.net.

Newer PostThe Rib Feast was highly successful, thanks!
Older PostSuper Tuesday coming to a polling place near you