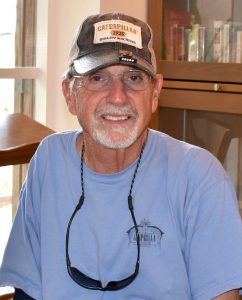 Dixie Hollins has been fishing in Boca Grande since he was 12 years old. “My father brought me fishing here before the bridge was built, and we took the ferry over,” he said. “He told me that we were going to fish the traditional Boca Grande way and be respectful to the other captains.”

Learning to mark the lines in green and red and use the seawall as a marker, he quickly picked up on the local tradition.

His dad always used to bring a cooler of pork loins and hams to give out to all the captains. “I asked him why he did that, and he said it was because the Pass belonged to the guides, they knew how to fish it, and we’re going to have to earn respect in this community so we can learn how to fish with them.”

Dixie’s dad, Rip, and his mother, Chris, would come down from Tampa regularly to fish in Captiva Pass before they found Boca Grande. They started renting a house on the island in the summer to fish for tarpon and pompano.

Rip kept a log of all the fish he caught and did a lot of entertaining on the island. “They would fish from nine in the morning until noon, come in for lunch and a nap, and then go back out again from three until six.”

Dixie said that back in the earlier tournaments, when you weighed the tarpon you could only bring one fish per day to the scales. “I’m glad they don’t do that anymore.”

Dixie had a boat called the “Chris Rip,” named after his parents.

He remembered walking into Miller’s Marina bar one evening after fishing, and Babe Darna asked him why he was there.

“I said I wanted to have a drink, and Babe said only professional drinkers were allowed there, and he told me I needed to leave.”

It was then he was introduced to Miller’s traditional tarpon tournament.

He recalled his mother and father would go to The Gasparilla Inn before the tournaments.

“My mother would have two Chesterfield cigarettes and two martinis, and we’d always be late for dinner,” Dixie said.

Twenty-three years ago his mother fished (and won) the Ladies Day Tournament. She caught the only tarpon.

In 1984, his dad took third place in the Boca Grande Club Tournament, and that’s when Babe finally let Dixie have a cocktail with him at The Temp.

“I’ll never forget it,” he said. “The Chris Rip’s motor went out on the first day of the tournament, and Raymond Rodriguez fixed it, and we won the tournament on the second day.”

Tradition is a word that has stuck with Dixie ever since. He started the Hollinswood Tarpon Tournaments in Boca Grande in 1996. They were traditional all-release tournaments, held about five or six times each year on a Sunday afternoon, just before or after a full or new moon.

“We had a lot of fun at those tournaments,” he said. “It was at that time that this family community took me in as a lost child and I’m grateful for that, and I honor this community in keeping up the tradition of tarpon fishing.”

Before technology came along the captains used range markers, lining up their boats with the lighthouse and the beach.

“Back then there were not very many people here and not that many boats, so there wasn’t a lot of pressure,” he said. “Many days we’d hook up 12 to 15 fish in one afternoon.”

Today the teams use heavy test line and rods and reels that bring the fish to the boat in a short period of time, which means the fish doesn’t get as exhausted before it is released. Then it has a chance to continue living and not fall prey to sharks.

It was during one of the tournaments that Dixie met his wife, Robyn. They’ve been married for 14 years.

The tournaments were named after the family business, Hollinswood Ranch in Citrus County. The ranch is comprised of cattle, timber and mining operations.

His family purchased the land in 1942.

Dixie ran the ranch with his father and grandfather and he still operates the ranch today, splitting his time between Crystal River and Boca Grande. He bought a place on the island 30 years ago.

He recalled one day, while sitting in a booth at Miller’s, a gentleman came and asked him about the Hollinswood Tournaments and how often they were held. Dixie said this was the fourth year.

“The next thing I know, he reached in his wallet and pulled out a card saying he was with the Internal Revenue Service, and said he wanted six percent of the sales tax from the last three years,” he said.

Dixie had a boat named Midnight III, which was named after his dog. He believes the best time to fish is three days before or after a new or full moon. There is more oxygen in the water during those phases and plenty of bait in the water.

Last Monday, Dixie spoke at the Grande Tradition event, an evening hosted by the Boca Grande Area Chamber of Commerce. It was held at the Crowninshield Community House and featured guest speakers from different eras who discussed the history of the tournament and how it has changed over the years to focus on the protection of the fish. Dixie, Mary Kean and Cappy Joiner regaled the crowd with many of their stories from the past.

Capt. Lamar Joiner Sr. and Betsy Joiner were honored at the event for their many years of involvement in the World’s Richest Tarpon Tournament.

This year he is serving as the head judge at the World’s Richest Tarpon Tournament. He also served on the committee that writes the rules for the event.

“We want to make sure there are no gray areas and the participants fully understand them,” he said. “That’s why the rules are read at the captain’s party, and we even have them sign a copy of them before the tournament begins.”

Dixie said he is very honored to be the head judge this year. He said the job of the head judge is to make sure the tournaments are run by the rules, that they’re safe and organized well, and the participants display true sportsmanship.

“We’ll do the best job that we can do to make sure everyone has a fun time … and that’s what it’s all about. Yes the prizes are important, but the community, the camaraderie, the friendships and the memories are always the best.”

The World’s Richest Tarpon Tournament fishing will wrap up today, but the festivities will continue through Saturday.

See page one of today’s newspaper for a list of the events and the team roster, as well as Tarpon Festival specifics.