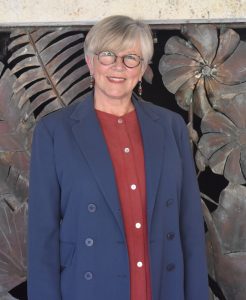 Bobbie Marquis ran a successful consulting business serving clients in Boca Grande and in the Englewood area for years, and now she’s working on the island full time as the executive director for the Johann Fust Library Foundation.

She officially accepted her new title in November, but she’s been serving as the interim director since last June.

“I was very humbled that I was asked to fill in over the summer,” she said. “I didn’t know what would happen in the fall, but I was happy to be working in Boca Grande again.”

Bobbie was born in Hartford, Connecticut. She grew up in Vernon, a town just east of Hartford, and later lived in Canton, a town incorporated in 1806.

For much of her career she worked in public relations and marketing.

After college, she worked for a British company called Diageo, a wine and spirits consumer product corporation. The company headquarters is in London, England. It was the world’s largest distiller until being taken over by China’s Kweichow Moutai earlier this year.

She started out in the finance department and eventually moved into information systems technology.

“I helped communicate business requirements to the technology staff, and helped explain technology to the business people,” she said.

She stayed with that company through several mergers and acquisitions and eventually served as the director of market communications for all of North America.

After Bobbie left the corporate world, she decided to open up a Celtic boutique.

Having descended from a family with strong Irish roots, she began Irish step dancing when she was a young girl, always having a deep appreciation for her heritage.

When the family celebrated her grandmother’s 87th birthday, she rented a house on the southwest coast of Ireland and invited her cousins, aunts and sisters to join in the celebration.

“There were eight of us women, and we spent 10 days

exploring the country – it was the trip of a lifetime. My grandmother was so ecstatic, it was just an amazing experience,” she said.

While exploring the country, the family met Irish artists, weavers and potters in their daily travels.

On the flight back to America and for days after she returned home, Bobbie couldn’t stop thinking about her grandmother, Maggie Dailey.

“I just kept saying her name over and over again in my head, and then I realized what my next step in life should be … and that’s what I wanted to name the boutique.”

Bobbie developed relationships with many of the crafts people in Ireland, importing many original items from their shops to her store in Canton.

She returned to Ireland a year later, looking for additional authentic merchandise for her boutique, which was devoted to Irish culture. Classes in Celtic mythology and Irish history were offered regularly at the shop by guest teachers and authors.

“I made some great friendships with many of the artists over there, and I really enjoyed working with them,” she said.

Bobbie’s aunt Margaret, her cousin Colleen and a very good friend named Olga regularly helped out at the shop, making it a true family business.

“My grandmother would come in to the store all the time, and she’d sit wearing her shawl and holding her walking stick, and the customers would recognize her from our television advertisements.”

After five years, Bobbie decided to close the boutique and move to Florida. Her parents had retired to North Port, and her sisters soon followed, so she wanted to be near family again.

After relocating to Englewood, she started a consulting business focusing on assisting people with QuickBooks projects and website design. Her technical experience helped land some clients very quickly.

“I primarily worked with small businesses and non-profit organizations,” she said.

Word was spreading quickly about her experience and knowledge, and she started to receive more and more referrals to work with people on the island, eventually spending several days each week working in Boca Grande.

Bobbie did the layout and design work for the recent Friends of Boca Grande Community Center’s “Civil War Reflections” book.

“That was a pleasure to partake in, and I enjoyed working with everyone at the community center,” she said.

When she isn’t working, Bobbie enjoys reading, writing, cooking and spending time at the beach. She also enjoys listening to Irish folk music.

Bobbie currently lives in Englewood with her fiancé,’ Lenny.

Her son, Andre Szychowski, is a professional fitness trainer in northwestern Connecticut. He recently came to Florida to visit her for Thanksgiving.

“We had a wonderful time,” she said.

Board members of the JF Foundation approached Bobbie last spring when the former executive director retired. They inquired if she’d be interested in working for the organization.

“I really love this library, and I was so happy they asked me to fill in as the interim director.”

Staff members at the Johann Fust library were already familiar with her work. In 2008, she assisted with QuickBooks issues and several other projects.

As executive director of the Foundation, her main priority is to implement their mission, which is to ensure that the beautiful building, grounds and gardens at the campus are cared for and protected.

“It’s an architectural gem,” she said. “It was built by Roger and Louise Amory in 1950. They had planned to build it as a library, and they lived in the apartment upstairs.”

Roger and Louise were forward thinkers, and they had a large cistern built near the garden area of the library. Excess rainwater flows into a drainage system, which empties into cisterns that are used to water the gardens.

The JF Library Foundation owns and maintains the award-winning buildings and the lovely gardens and statuary. The Foundation also presents a literary series each year, which is free of charge and open to the public. The Foundation and the Lee County

Library System work together to support the institution.

Bobbie is also responsible for the finance, marketing and communication programs for the Foundation.

“Part of the Foundation’s mission is to provide an intellectual and cultural center for the residents and visitors in Boca Grande,” she said. “We are happy to announce some exciting programs planned for this season.”

The Foundation’s annual benefit will be held on February 20 at the Boca Grande Community Center auditorium. The event will feature Amor Towles, author of “A Gentleman in Moscow.”

“I love the people of Boca Grande, the staff and the board at the library,” she said. “Everybody truly cares very much about our efforts. This library is really a treasure.”

Newer PostHelp with history: What do you know about this photo?
Older PostObituary Mike Gary