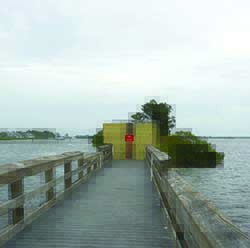 BY MARCY SHORTUSE – The Boca Grande Fishing Pier at the north end of the island is partially closed, due to Charlotte County Parks and Natural Resources staff saying there is some potential for structural instability.

As of Thursday afternoon, Feb. 4, only the last 36 feet of the pier have been walled off. Fishing is still on, at least for now.

This is the second time the pier’s integrity has been discussed, and it was shut down a few years ago for the same problem. Last time the county reinforced the old trestle under the pier, which was originally built in 1905.

The Charlotte County Parks Department has said they will be checking the situation out in the very near future, and will determine how much damage there is and how much it will cost to fix it.