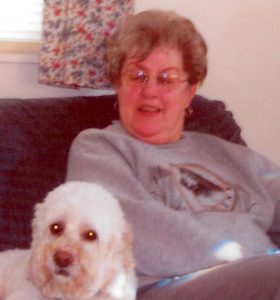 On July 3, 1954 she married Gerald Thibodeau. Together they raised six children and were married 65 years. Janet was a great cook and her children always enjoyed home-cooked meals while growing up.

In their younger years, Janet and Gerald liked going out to dinner and dancing with their friends.

Janet worked at the Sail Loft Restaurant when she was younger and for several years, owned a Beauty Salon.

With her husband, Janet worked at Gasparilla Inn on Boca Grande for many years and at The Hillsboro Beach Club, in Hillsboro Beach. They also worked at Black Point Inn in Scarborough, and in Cape Cod, Mass.

Janet was pre-deceased by her mother, Maude Holbrook Watts; a son, Gerald Jr.; two siblings, June Allen and Malcolm Watts; her mother-in-law, Ruth Dyer and a daughter-in-law, Stephanie. She is survived by her husband Gerald of Rockport; three sons, Wayne and his wife Hillary of Cushing, Steve and his wife Tina of Union, Arthur of Camden; two daughters, Dawn Bailey of Rockport, Cheryl Harford of Camden; her twin sister Janice Carleton and her husband Jim of Rockport; her grandchildren, Jamie and her fiancée Mike, Nicole and her husband Andrew, Ashley, Kelly, Danielle, Meghan and her partner Dakota, Lyle, Andrew, Mike, Georgia, Jacqueline, Jennifer, James and Sammy; great-grandchildren Rylee, Mason, Jordan, Javin, Oliver, Jack, Luke and Vinny, as well as several nieces and nephews.

No services will be held at this time. In lieu of flowers, memorial donations may be made to Pope Memorial Humane Society of Knox County, P.O. Box 1294, Rockland, ME 04841.

To share a memory or story with Janet’s family, please visit their online Book of Memories at bchfh.com.