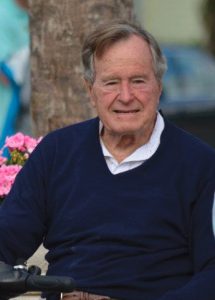 Hearts are breaking all over the island with the passing of former President George H.W. Bush on November 30. Many island residents knew him, and even if they didn’t love his politics they loved him as a man, a neighbor and a lover of Boca Grande.

It’s easy to dismiss the passing of a celebrity or dignitary with the presumption they were affected, or that their personalities were flawed by fame. This was the furthest from the truth with our former president. He and his family were always generously welcomed when they came to town almost every year because he, and they, are just good people.

He reminded you of a favorite uncle, or a kindly neighbor. There was no pretense in his demeanor; there was always a twinkle in his eye. If you saw him out and about and he caught you looking, he would always give a wave and a grin. For many years they would leave The Inn on New Years between 10 and 11 in the morning, and instead of quickly being whisked away by the Secret Service they would always linger in their goodbyes while standing on the sidewalk, much to the delight of the small crowd that always gathered. Even when he was limited to a wheelchair in his final years, you could tell he had no fear while in Boca Grande, and he never seemed annoyed when he was approached by a fan.

He loved to fish, he loved The Inn, he loved to socialize and enjoy good food and company; therefore, he loved our island. He was always here with his big family, and the sense of humor and great love for each other they displayed was palpable. In short, they were a joy to be around … so much so, you could forget for a second you were supposed to be in awe of this man who was the 41st president, and his son who was the 43rd (we’re not forgetting you Jeb, we love you too and, while we’re on the topic, you should have run as well).

The end of an era has come and gone with his and Barbara’s passing. We hope he’s eternally in the universe with her, able to go where they wish without a Secret Service escort, forever in the presence of a loving God.

Thank you for your service, President Bush.