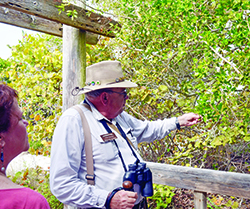 BY SUE ERWIN – Ten explorers climbed aboard a 42-foot covered catamaran named the “Papyrus” and departed from Cape Haze Marina to Don Pedro Island last Monday to traverse the island.

The walking tour was led by Charlotte Harbor Environmental Center docent Al Squires, who has been a volunteer with the organization since 1995. The group toured the island’s nature trail as Squires identified various native and non-native plant species. Attendees also walked an area of the beach where Squires identified numerous sea creature shells and fossils.

During the boat trip to the island, Squires pointed out facts like the importance of red mangroves and how they help protect the land from hurricanes.

Typically, guests can expect to see all kinds of nature during the 20-minute boat ride to the island, including several species of birds – white pelicans, ospreys and loons – and with any luck, spot dolphins playing and feeding in the Intracoastal Waterway.

Once at the park, Squires identified various plant species, among them buttonwood, gumbo limbo and wax myrtle. He also supplied the group with useful facts. “See these berries?” he queried. “If you were to eat these, you would become violently ill for the next 24 hours. However, those growing there would keep you alive if you were stranded here.”

Captain Michael Pines and First Mate Susan Little served as navigators on the catamaran. The vessel is named “Papyrus” after the yacht that was used from 1954 to 1972 to bring books from the Johann Fust Public Library to surrounding islands, including Useppa, Cabbage Key and Captiva.

The intent of the partnerships between these organizations is to provide educational programs to the public on islands which are accessible only by boat. The new Don Pedro Island tours are available on Tuesdays, Wednesdays and Saturdays from 9 a.m. to noon and 1 p.m. to 4 p.m. While the tours are free, a fee of $20 is charged for boat service to the island, including State Park entrance fees and parking. Sunset cruises are also available for $25.

Don Pedro Island has restroom facilities, but neither food nor beverages are available for purchase. Guests can bring a lunch and enjoy it under a covered pavilion.

Captiva Cruises, with a fleet of seven vessels serving eight local island destinations, are celebrating 30 years as the official concessionaire for the State Park Barrier Islands. They also offer cruises to Cayo Costa departing from Boca Grande on Thursdays from 10:30 a.m. to 3:30 p.m. The cost is $25 for adults and $20 per child.