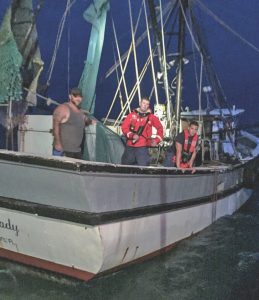 The United States Coast Guard has been busy with weather-related activity lately, including a recent rescue just off the Gasparilla Island coast.

Coast Guard Sector St. Petersburg watchstanders received a report at 6:28 p.m. Tuesday from the Charlotte County Dispatch stating three people aboard the Salty Lady, a 52-foot fishing boat, were taking on water and they were in need of emergency assistance 4 miles west of Gasparilla Pass.

A Charlotte County Sheriff’s Office marine unit crew arrived at 7:38 p.m and assisted with dewatering the boat. The boat crew aboard the Seahawk arrived at 8:22 p.m. and the RBM arrived at 10:12 p.m. to join the dewatering efforts. At 1:19 a.m. Wednesday, the boat crews determined they were not able to keep up with the flooding to safely tow the Salty Lady crew.

No injuries were reported. The owner is making arrangements to have the Salty Lady towed to Boca Grande.