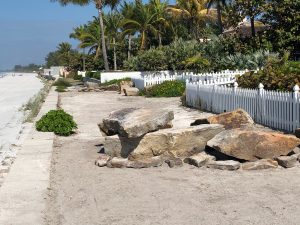 BY MARCY SHORTUSE – In an act of good faith and a love of our island community, the owners of the property located on the Promenade at 3rd Street and the beach have moved the rock structure that was blocking the historic walking path. Doug and Carolyn Comrie’s representative told the Boca Beacon that they were in the process of moving the rocks 40” back on each side of their property, which will allow ample room for walking … and the amount of space even conforms to wheelchair standards.

After some preliminary conversations between the Comries’ representative and the Beacon, it was determined that this was more of a miscommunication than anything else. After all, it isn’t that the rocks are bad  – they’re just bad when they block the way. When that message was conveyed to the Comries, they agreed that the rocks could be moved slightly to the side. This will not only allow ample walking room, it will also allow for a nice place to sit and look at the water for those who walk the Promenade.

See next week’s Boca Beacon for another story about how the newspaper is working with the Lee County Property Appraiser’s office to determine who actually owns – and doesn’t own – the land.

We will also go more in-depth with other obstacles that block the Promenade, and what might be done to accomodate walking the path once again.