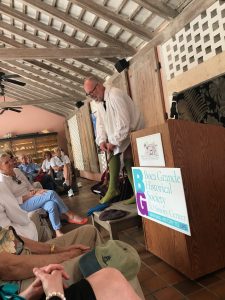 BY MARCY SHORTUSE – Not one, but two, speakers were at the first installment of the History Bytes program held on Wednesday, Feb. 5 at the Johann Fust Community Library, and both were mesmerizing. Particularly because they were actually just one person.

What was advertised as a 35- to 40-minute discussion of Mayflower facts and figures by Plimoth Plantation Deputy Executive Director Richard Pickering was just a ruse, because  what the crowd actually got was Pickering at his finest as well as his alter ego, John Howland. Howland, one of the passengers aboard the Mayflower, accompanied English Separatists and other passengers when they left England on the Mayflower to settle in Plymouth. Howland was an indentured servant and in later years an executive assistant and personal secretary to Governor John Carver. He signed the Mayflower Compact and helped found the colony. 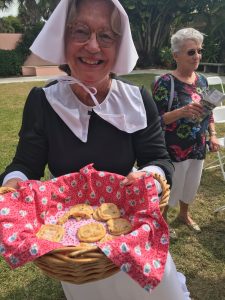 When crowds began to arrive, they were greeted by Mayflower passengers Priscilla Mullins, who married John Alden (Priscilla is also known as island resident Susan Bowers) and the stoic William Brewster (known around the island as Jim Blaha).

Boca Grande Historical Society Board member and Secretary Nancy Lyons introduced Pickering. She reminded the audience that John Howland is is often remembered as the passenger who fell off the Mayflower into icy Atlantic waters and survived. Lyons mentioned that if Howland had not survived that incident, there are many who would not be here today … including the island’s own Bush family, who are some of his descendants.

While some may think that historical lectures can at times be boring, this was most certainly not one of those times. Pickering held the audience in the palm of his hand from the moment he came out and introduced his lecture by saying, “What you are about to see is Richard’s Pilgrim Strip Show.”

And indeed, that is what he did. He explained that the reason for this particular presentation was because of a request from the United Nations back in 1995, when he was very early on with his career with Plimoth Plantation. The United States delegation asked him if he could explain the history behind the American Thanksgiving tradition, as a pilgrim, to diplomats from around the world. When he explained it would be very difficult to walk out as a pilgrim and start the presentation in such a flat manner, he had the thought that he would slowly change into a pilgrim while onstage.

That was the first time his “Strip Show” was performed, and it was received admirably. However, Pickering actually had to go through special training at the UN – twice – to make sure he was briefed on how much skin could show.

“They were very worried, particularly about some diplomats and the sole of my foot,” Pickering said. “We figured out I had to wear a long-sleeved T-shirt, and I had to shimmy out of my pants and  pull my stockings up offstage. In the end, the diplomat they were most frightened to offend came up to me and said, ‘I loved it when you took off your clothes!’ ” 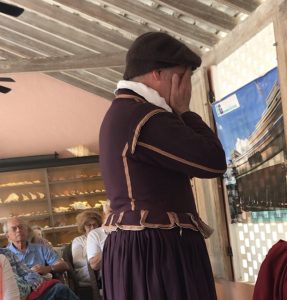 Pickering’s own presentation was fantastic as it was, but when he had completed his stages of dressing in authentic dress garb of the time (as he described it, what a man of the time might wear to court or to an elaborate function), he explained to the crowd that when he turned around and put his hat on, he would become John Howland. Indeed, the marked change in his demeanor, his accent and manner of speech transformed him very believably into a man who lived in the 1600s.

He described his son’s imprisonment for his crazy Quaker ways (Howland and a majority of his fellow passengers were Reformist Christians who eschewed the Quakers as Satan spawn) and his extreme misadventure that occurred aboard the Mayflower, when he fell into the Atlantic and was miraculously saved.

He particularly liked to banter with audience members regarding matters of life and love of his times, including one lady in the audience who admitted she was not married, and might possibly indulge in romance from time to time.

“Are you a married woman?” he asked her. When she responded in the negative, he said, “Come to Plymouth! Women are always sought for marriage. I would ask you, would you trust a bachelor?”

Just minutes later, after describing his “goodly marriage” to a young woman who, like him, had been “left alone unto the world,” he asked that same audience member, “You are not indulging in romance, are you? To which she replied, “Uhhhhhh … “

Howland expounded on the great importance of marriage in his era in history, and what the common thought of finding a mate was at the time.

“Romance is not a thing wherein you should spend any time, for is romance not like gunpowder going off in your face? It is a thing that is quickly done. One would desire a marriage that love at the end is greater than at the beginning.”

When she enthusiastically responded, “Yes!” he quickly replied, “Oh, you need help.”

He explained that during the first winter in Plymouth, half the colonists died within two months.

“I watched everyone around me in Master Carver’s household die, and by the spring of the year I was alone,” he lamented. “And so it were, I married myself unto a young woman who herself had been left alone unto the world, and it had proven to be a goodly marriage.”

Howland also described his encounter with “pirates” on the Kennebec River in Maine. He was put in charge of a trading post there, and one day he took approximately 20 young boys up the river to oust the competitive ne’er-do-wells, who had no right or license to do trade with the Indians there and who had been cutting them off.

As they were preparing to cut the anchor on the pirate ship, one of them appeared on the deck, leaned over, and put a gun to the head of a boy named Moses, who was cutting the ropes. Howland attempted to redirect fire in his direction and said, “Kill me. The boy is only doing what I told him.” Moses was shot and killed anyway, and in turn one of Howland’s men killed the killer. Howland and the other man, John Alden, were convicted and imprisoned because of the incident but were eventually released. The death of Moses Talbot and subsequent imprisonment of Howland and Alden signaled the beginning of the end of a working relationship between the Plymouth Colony and the state of Massachusetts.

At the end of that story, and with a sweep of his hat from his head, Pickering became Pickering once again. There was a question-and-answer session then, with some questions answered by Pickering and some by Howland. When the presentation wrapped up, the audience indulged in treats that included mini-Mayflower cupcakes and pilgrim hat cookies. 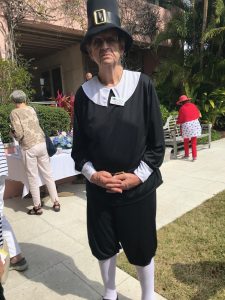 You can watch video clips of this presentation on the Boca Beacon Facebook page. The next History Bytes will be held on Wednesday, Feb. 12 and will feature island son Milton Bell, who will talk about what it was like being raised on the island, particularly in the “South Dock” area. It will begin at 11 a.m. and will be held in the Fust Library Loggia. If the weather is inclement, the talk will be held at the Our Lady of Mercy Parish building.