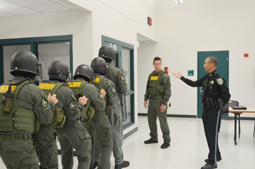 The slamming of thick steel doors, locking them shut behind armed officers in green uniforms, is enough to ensure cooperation from most visitors who enter the halls of the Charlotte County Jail. “Welcome to the rock,” said Captain Norm Wilson to a group of local media representatives during a tour of the detention facility on Tuesday, June 28.

Charlotte County Sheriff Bill Prummell invited members of the media to come and learn more about the facility after a string of inmate deaths sparked the interest of the community recently.

The tour started out with a demonstration of the Correctional Emergency Response Team (CERT). Four deputies dressed in full protective gear including helmets gave an example of how to extract an inmate who is threatening harm to others or is about to cause self-harm. “We have to make sure we are keeping the inmates safe as well as our staff safe. Just like out there, this place is like running a city within a city,” Wilson said.

The maximum capacity at the facility is 960. As of June 28, there were 720 inmates residing at the jail. Of those, 500 have been diagnosed with mental health issues since the beginning of 2016. The jail opened in 2001 as a 528-bed facility at a cost of 25 million dollars. In 2010 it grew to a 960-bed facility at a renovation cost of 47 million dollars. Prummell said the Charlotte County Detention Bureau is primarily responsible for housing pre-trial detainees. This is done in a contemporary leadership style called direct supervision. This means there are no traditional bars and doors separating the staff from the inmates in certain pods. “In a typical housing unit, the inmates are allowed to roam the pod from 7:30 a.m. to 9 p.m. Many of the people in them have not been convicted of a crime yet,” Prummell said. Each pod holds up to 64 inmates. The bureau cannot detain a juvenile for more than six hours.

Major Earle Goodwyne said the inmates are classified based on the charges against them as well as their behavior. “Our principal goals are to maintain a safe, clean and quiet environment. We believe in treating each person with respect and dignity, and we expect that in return,” Goodwyne said. Prummell said the biggest change he has seen at the jail in recent years is the increase in female inmates. “We have more than 100 female inmates right now,” he said. The sheriff also rents housing space to the United States Marshals. The revenue is given back to the general fund.

Col. Thomas Rodgers said staff members at the facility are challenged with dealing with a variety of inmates, ranging from those charged with petty retail theft all the way up to those charged with murder. “It makes our job more difficult than a prison, because you never know who is going to walk through those doors,” Rodgers said. He added that one-third of the inmates suffer from addiction and mental illness. “We cannot force-medicate in here. The inmate has to be willing to take medication after a diagnosis.”

The existing medical unit was built to hold nine inmates. “We currently have people waiting on a medical list, so we’re going to be building a new infirmary. We’ve had to move some of them to regular housing units to treat them,” Prummell said. He added that the Bureau tries to utilize in-house mobile medical providers for X-rays or chemotherapy whenever possible. A new medical wing is currently in the planning process and will cost an estimated 9 million dollars. It’s slated to open sometime in 2018.

Sheriff Prummell addressed the recent issue of the two inmates jumping from the second tier of a housing pod to a cement floor in June. On June 3, 2016, inmate David Szakalos jumped off a second-tier pod, was critically injured and died on June 10. On June 23, 2016, inmate Billy Ray Wilson jumped off a second-tier pod and sustained minor injuries. “Everybody who spoke with him thought he (Szakalos) was getting better mentally,” Prummell said, adding that such actions by inmates are often very difficult to anticipate. He referred to the past two incidents as “shock to incarceration.” He also pointed out the fact that the public doesn’t hear about how many lives are saved on a regular basis by stopping inmates from self-inflicted injuries or causing harm to others at the jail. “We can’t be sure of what they are thinking at any given time. When someone commits suicide but doesn’t give any indication, that is very hard to prevent,” Prummell said.

Captain Melissa Turney added that during intake evaluation, staff members try to determine if the new prisoners are veterans or are mentally unstable, so they can be placed in other kinds of suitable programs that may help them down the road. “Anything we can do to defer them into another program, we try to do it,” Turney said about the booking process.

Facing re-election this year, Prummell must first get past two challengers in a Republican primary on Aug. 30. If he does, he’ll have a Democratic candidate and another rival not affiliated with any party to confront in November.