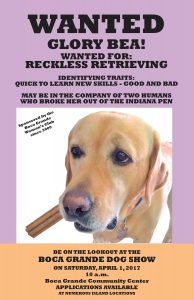 If you haven’t gotten your dog registered for the Boca Grande Woman’s Club Dog Show on April 1, you only have until March 22 to do so. Applications are available at Fugate’s, Hudson’s Grocery and Kappy’s Deli.

There’s another contest, though, that you can help your favorite dog win another prize, and that contest runs right up until the day of the Yappy Hour Cocktail Party, on March 31. Your chance to see all of the dog show posters – and so far there are more than 60 of them – is on the Boca Grande Woman’s Club Dog Show on Facebook. There you can “vote” on your favorites by clicking “like,” and the winner will be acknowledged at the Yappy Hour Cocktail Party on March 31, preceding the dog show.

If you would like your dog to be featured on a dog show poster you can call Sally Allgyer at 964-6415. The cost of the poster is a donation to Suncoast Humane Society.

In the mean time, make sure your dog is signed up for the 2017 Boca Grande Woman’s Club Dog Show that will be held on April 1 from 10 a.m. to noon. Admission as an observer is $15 per person and free for children 12 and under.

The Yappy Hour Cocktail Party will be held on March 31 on the grounds of the Boca Grande Community Center (where the show will be held the next day). The cost is $100 per ticket and includes an open bar, hors d’oeuvres and music.

With your Yappy Hour ticket you can also view the dog show the next day for free.