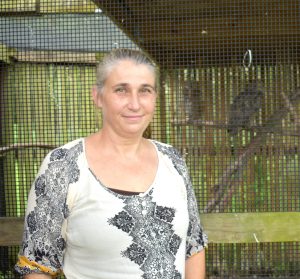 Pam DeFouw is the new director of operations at the Wildlife Center of Venice, but she certainly is not new to the facility.

DeFouw started out as a volunteer for the organization in 2011, cleaning and feeding sick, injured and orphaned wildlife. She was quickly offered a position cleaning cages at the facility.

“I had just retired and was so excited to be working again,” DeFouw said.

Within a couple of months, she started to work with rehabilitating the animals and soon became head of rehabilitation, treating more than 15,000 patients at the facility.

The Wildlife Center of Venice was “born” on January 1, 2004. It was the long-time joint dream of founders Kevin Barton and Linda Schrader. It was officially incorporated in March, 2004 and became a nonprofit agency later that summer.

The Wildlife Center is continuing to grow and adapt to create an even more effective future for the wildlife in Southwest Florida.

“So many wonderful things are happening at the Center,” DeFouw said. “The biggest is the upcoming move to our new facility.”

After the permitting process is complete, the facility will be moving across the street to 925 N. Jackson Road in Venice.

“Linda Schrader retired about five years ago, and she still lives in the house on the current property,” DeFouw said. “The benefit is that the new five-acre facility we are moving to is just around the corner, and it will include a house that we will be using for surgical procedures and an office.”

Many of the existing structures will be moved to the new facility during the transition. The goal is not to stop any services during this transitional phase.

“We are the only facility that serves both mammals and reptiles in Sarasota County,” DeFouw said.

The organization is in the process of trying to get some grants for the new facility.

“We’re trying to build an aquatic rehabilitation area for turtles, because we get more than 200 per year, and they have to be tested in large bodies of water before they are released.”

Each year the number of animals served continues to rise, so they’re planning to extend the bird and shorebird hospital.

The Center has permits to rehab animals, but DeFouw’s mission is to educate more people on local wildlife, which requires a different kind of permit.

“I want to put more emphasis on awareness and education, and I’m trying to get out into the community more to talk with people about our mission,” DeFouw said. “I think many people in the community want to do the right thing when they see injured or sick wildlife, but they just don’t know what to do. The more we can attract people to what we do, the better. And our website is more geared toward that now.”

The organization has 150 volunteers and four staff members.

“We couldn’t do what we do without the volunteers.”

A volunteer DeFouw works with regularly is Boca Grande’s The Loose Caboose owner Blanch Vedette, who is always willing to capture and transport sick and injured wildlife on the island.

She recently spent an afternoon trying to catch a wounded pelican at the south end of the island, and she took it to the Center for treatment. It’s currently being rehabilitated at the facility.

“I usually will send her a text message when it is ready to be released, so she can pick it up and release it where it was found,” DeFouw said.

The Center’s director said she is surprised there haven’t been more birds brought in recently due to the red tide bloom, recalling that during the last winter bloom, sick birds were brought in almost daily.

The animals are identified by placing colored bands around their legs, which makes it easy to document the recovery process.

Baby bird season happens in peaks and dips throughout the year in Florida. Right now, we are in the slower, pre-peak season.

The Center currently is treating young crows, woodpeckers and blue- jays. There are also a few domestic chickens, vultures and many turtles that have been hit by cars.

DeFouw added on a sea bird hospital in early 2018. The facility has cages, sinks and power strips to run heat lamps to the patients.

“And we’ll be adding to this facility when we move, because we are almost always full.”

The hospital currently has pelicans, a stressed cormorant, egrets, herons and a sandhill crane that was hit by a car.

“This is a busy bird-of-prey season for us; at one point we had 27 red- shouldered hawks on the property – we were very busy.”

There are also two nonreleasable great horned owls that will live permanently at the facility.

One was brought in as a nestling last year and has very bad cataracts, and even after medication and treatments, they didn’t clear up to the extent she could be released and be able to hunt for food again.

Another injured owl was brought in two months ago, but unfortunately her wing could not be saved.

“They are absolutely beautiful, and they both get along really well,” she said. “I was nervous when I put the younger one in the cage with the other one, because she just stared at her for an entire day.”

The owls are housed in a wooden cage built by a local Eagle Scout.

After intake, the sick and injured animals are sent to Dr. Jack Landis and Dr. Steve Iulo in Venice for treatment.

“They are both incredible veterinarians.”

WCV has all the state and federal permits to care for and rehabilitate sick, injured and orphaned wildlife.

The wildlife hospital is located on five acres of land belonging to Schrader. Several wildlife hutches, animal barns, squirrel habitat, a songbird aviary and a raccoon habitat exist at the facility. All of that will be moved to the new location.

A pond at the present facility also serves as a waterfowl rehabilitation area. The Center’s secluded location is ideal for wildlife recuperation. It serves Manatee, Sarasota, Charlotte and Lee counties.

Newer PostWhen will it ever end? Authorities not providing enough information on red tide
Older PostGot some dead fish? Throw ‘em in the dumpster