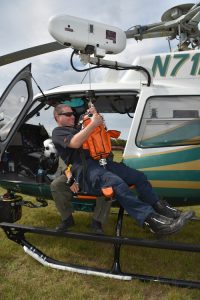 BY MARCY SHORTUSE – If you were wondering why there was so much helicopter activity over the south end of the island this week, it was due to a combined water rescue training for island Lee County Sheriff’s deputies, the Boca Grande Fire Department and Lee County EMS. This training is part of an effort to strengthen the relationship between the two departments, and to familiarize island first responders with the equipment that Lee County Sheriff’s Office aviation units would use in the event of a water rescue scenario.

With more than 1,200 square miles of land and sea to protect in the county, this training was invaluable for first responders.

The helicopter that was used in the training that took place at the open area within Hill Tide Estates on Tuesday, Wednesday and Thursday, Feb. 3, 4 and 5, is relatively new to the Lee County Sheriff’s Office, so everyone involved had a good chance to hone their skills. 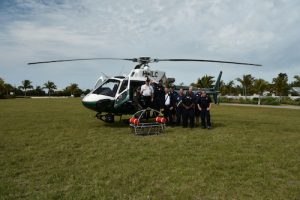 The Sheriff’s Office also has a new rescue basket that can be used to extract people from the water, or from land if they are trapped on a barrier island with no boat. They also have what is called a “Jungle Penetrator,” which looks like a large anchor that can be dropped down into the trickiest of places – such as mangroves – to drop off a first responder or pick up a person.

Jungle Penetrators have been used by the military and by first responders for many years, and were heavily relied upon in Vietnam to extract individuals from densely-forested, jungle locations.

The helicopter has a hoist mounted on the side, so pilots can quickly change out the Jungle Penetrator for the rescue basket, or vice versa, depending on the the rescue needs of each situation.

“It was a good training exercise,” Blosser said. “It was very appropriate; we will probably use that training sooner, not later. The guys got some hands-on experience with all of the equipment and they were able to familiarize themselves with most operational aspects, such as how to deploy it and attach themselves to it. They did a demonstration with raising and lowering of the basket, too. We went over other search and rescue operational objectives, such as how to better communicate in noisy situations, frequency and channel syncing, and a lot more.”

Blosser said he wanted to thank Hill Tide Estates for allowing them to use the field for their training.