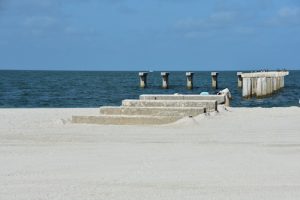 BY MARCY SHORTUSE – Excavators were seen driving off island Thursday morning, June 20, as the beach renourishment program is wrapping up. The extra beach isn’t as obvious at the Historic District access points … but my, oh my, is it ever noticeable at the old fishing pier at the south end.

The landmark that locals commonly call “Bocahenge” is half covered with sand now (shown above). It used to be completely unfettered of sand, out in open water.

According to James Yocum of the U.S. Army Corps of Engineers in Jacksonville, the new sand stops at the access pass from the parking area where it reaches the beach, near the Port Boca Grande Lighthouse. Many are wondering why the dunes in front of the Amory Chapel that were taken away by Hurricane Irma and the storm just before her were not replenished, and Yocum explained.

“State Park beaches are managed by Lee County and the Florida Parks Service,” he said. “The Park Service secured permits for renourishment from South Beach Restaurant to just north of the Lighthouse museum. This work was bid concurrently with the Federal Shore Protection Project and is being administered by the U.S. Army Corps of Engineers on behalf of Lee County. Construction of this segment began on Saturday, June 15 after completion of nourishment along the federal project and is expected to wrap up over the next few weeks.”

Gasparilla Island State Park Manager Rick Argo said he was told that, supposedly, the areas not included in the renourishment project (including where the dunes used to be) were supposed to fill in with the movement of the new sand.

Yocum said that while they were wrapping up on Thursday, the actual demobilization project will last about 10 days after that.

Good news for shell and teeth collectors: Yocum said the extractor was not needed for our beach renourishment, so there was no fine filtering done to our new sand. Beaches that have been recently renourished are usually a treasure trove of interesting marine items.

“The extractor has been on site but hasn’t been needed so far,” Yocum said. “The sand has to meet specific criteria mandated by the State for Lee County beaches, including grain size distribution, shell content and color. So far, the material has been very good and hasn’t needed to run through the extractor. You may notice that the new sand is slightly more coarse and gray at first. Over the next few weeks, the sun should bleach the sand until it becomes closer to the color of the existing beach.”