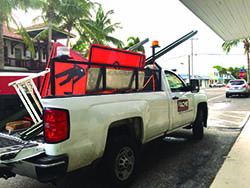 Ajax Paving Industries of Florida, LLC will be working on Gasparilla Road for the next three weeks, widening shoulders and repaving.

Lane closures are set for one-lane traffic only throughout the work zone.

The company’s concrete crew named C Squared will be on Gulf Boulevard, removing and repouring the ADA ramps on the Bike Path along Gulf Boulevard as well.

Newer PostRange Light update from BIPS
Older PostLetter to the Editor: Last call to get early ballots dropped off in Lee County