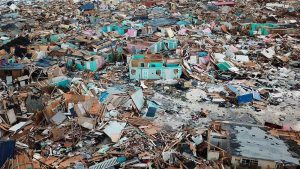 There was hardly a break in our typical summer weather at all when Hurricane Dorian was spinning off the state’s east coast as a Category 5 storm. It seemed surreal when looking back at the chaotic past week we had in the stores and at the gas stations on the mainland.

It wasn’t until Sunday that Publix had water back in stock and gas station pumps weren’t sporting yellow or red plastic bags on their nozzles. To say that the people of Southwest Florida set out to prepare themselves for the storm was an understatement … but unfortunately, it also showed how many people weren’t prepared for a typical storm season at all.

By the time Labor Day rolled around, it was clear in everyone’s minds that we had dodged another bullet. Dorian had made a definite turn to the north and was moving at less than a snail’s pace northward.
The storm had weakened considerably, but not before it all but destroyed many of the Bahamian Islands.

Two things were learned: Keep gas in your tank and water in your closet during hurricane season.

Mere hours after news reports of the destruction started coming into our media stream, Boca Grande and Cape Haze Peninsula residents were rallying the troops to organize rescue efforts. To learn more about those efforts see page 11 in today’s paper.