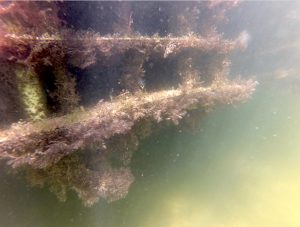 Ocean Habitat Inc. founder David Wolff invented the Mini Reef during his time as a University of South Florida marine biology student. After more than 100 prototypes, the Mini Reef system was finalized and placed in Marco Island waters. The city hired Ocean Habitat to install 25 reef systems in a canal to re-establish dwindling fish nurseries. They quickly became popular with island residents, who purchased more than 175 additional systems to use on their property.

The original intent was to place these systems under docks in canals to provide habitats for fish in otherwise barren underwater landscapes, such as Marco Island and Cape Coral. New opportunities for the system have developed, and large aquaculture reefs have been installed in the Florida Keys to aid in the growth and replenishment of common restaurant seafood.

“These aquacultures provide a safe environment for juvenile sea creatures to mature before they migrate out to flat bottom areas, where they can be harvested by commercial fishermen,” Wolff explained. “In the canals, residents are seeing all of those quality species that they have never seen before or haven’t seen in a long time. We’re seeing everything from stone crab, grouper and snapper to snook and tarpon.”

The Mini Reefs clean about 30,000 gallons of water per day, and they help hundreds of crabs and fish grow up every year. More than 150 species of filter-feeding animals like oysters land on, attach and live their lives on Mini Reefs. They filter the water as it passes by, feeding on the green phytoplankton and other microorganisms in the water. The Mini Reef also becomes a home for fish, shrimp and crabs. It shelters the animals and also provides food. All of this life inside attracts larger predators, so after a short time numerous fish are living around or visiting the dock daily.

Wolff had worked on an artificial reef as a University of South Florida marine biology student in the 1990s. At the time, the focus was cleaning water for the aquaculture industry, but when he retired after a successful career in real estate, Wolff revived the technology to re-create habitats in the “biological deserts” of canals found along Florida’s coast.

The Mini Reefs function much like the mangrove systems that originally lined Florida’s coast, providing places for filter feeders to attach and small fish to hide. The small fish, in turn, attract larger fish. Filter feeders like sea squirts move in shortly after the systems are installed; in three years the habitats reach peak efficiency with oysters and other filter feeders.

Based on his work at USF, Wolff created a water-quality project to document the impact in local canals, with volunteers collecting water and tests being performed by Ocean Habitats staff and student interns from local schools and universities.

“The goal now is to show how much difference these habitats make in water quality,” he adds. “People can already see what a difference they make in wildlife.”

For a more comprehensive version of this story, see the May/June issue of Gasparilla Island Magazine, which will be available by May 1.