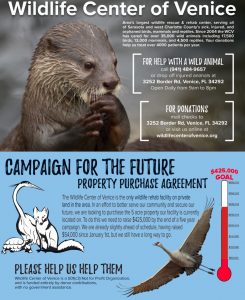 When wild animals or birds are injured around Gasparilla Island, they will more than likely end up at The Wildlife Center of Venice, Inc., where several local volunteers such as Loose Caboose Co-owner Blanche Vedette work countless hours to make sure our wildlife is taken care of. It was good news to hear, then, that after renting property for more than 13 years, The Wildlife Center finally has the opportunity to own its own land.

Although the owner and volunteers love the space where they currently are working, the property across the street has recently become available, and the open pastures there would easily accommodate the multitude of cages and aviaries they have, while still providing a private and tranquil setting that would be ideal for the recuperation of their patients.

“It’s almost right across the street from where are now,” said Kevin Barton, founder and executive director of The Wildlife Center of Venice. “We put 25 percent down and we’re about 70 percent of the way as far as reaching our goal, but we still need help.”

The Wildlife Center of Venice was founded in 2004 and has existed at the current location at 3252 Border Road in Venice since day one.

“We launched a public campaign when it became clear that we couldn’t own the property we were on, and then we saw this opportunity become available which was literally across the street,” Barton said.

The new property is a bit less than five acres, which is bigger than the space the 501(c)3 organization occupies now.

“The main thing we will gain is to have an entire house on the property, which will ensure a safe atmosphere for veterinary work,” Barton said. “We are moving some of our things now, and the animals will move later.”

The moving process is expected to take about six months.

“We’re hoping to continue to serve the community as we have since we opened,” Barton said. “We’re excited because we were able to raise the money we needed by just placing some phone calls to our loyal supporters.”

But help is still needed.

The August update showed they were approximately 70 percent complete in their $150,000 goal to secure the purchase property down payment. No September numbers are available yet.

Although many of the seasonal residents and volunteers haven’t returned yet, this is actually the busiest time for the Center, and they still receive calls on a daily basis. Baby birds and mammals have been coming in and are being dropped off at the Center in record numbers.

“This is our best hope to make the necessary move without a loss of service to any of the wildlife communities within our primary service range covering all of Sarasota, Charlotte and a portion of Lee counties,” said Kevin Barton, founder of The Wildlife Center of Venice.

Since it was founded in 2004, the organization has grown to treat more than 4,500 wildlife patients each year, making it one of the largest wildlife rescue and rehabilitation centers in the region.

The Wildlife Center of Venice has struggled to meet this ever-growing patient load despite many shortcomings.

“Our dedicated staff, volunteers and supporters deserve a lot of credit for our success,” Barton said. “In the past 14 years of operation, we have never taken a day off.”

The organization operates without any government funding, and as a nonprofit, it relies on grants, fundraisers, promotional events and private funding.

“Our wonderful volunteers have done a remarkable job of keeping up with the growing demand, but our financial resources are being sorely depleted as we struggle to provide for the ever-increasing population and to cover the growing costs of animal feed, medicines, caging, and electricity,” Barton said.

A GoFundMe page has been created, and every donation is appreciated.

For more information, please visit gofundme.com/venice-wildlife-center-relocation or wildlifecenterofvenice.org, or go to their Facebook page and look for the “just give” link.

Newer PostHome on E. Railroad Avenue is proposed site of assisted living facility – Proposal to go before Historic Preservation Board on October 6
Older PostIsland architect to be honored at MOD weekend