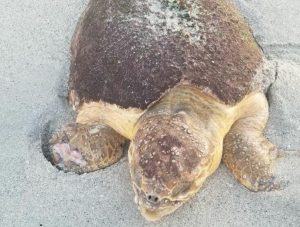 Boca Grande Sea Turtle Association patrol members reported that Larissa, the female loggerhead that was found wondering on the beach recently and transported to Mote Marine for treatment, is doing better. She is now eating on her own, but still is having a little trouble breathing in deep water. Her blood count was low at intake. She has a pit tag that was placed on her in 2005 in Broward County. She has also nested in 2009 on the east coast of Florida, so Larissa is a well-traveled turtle.

Hurricane Dorian had patrol members on edge all week with concerns about the nests.

Unfortunately, there isn’t much that BGSTA can currently do to protect nests in advance of a storm.

“In theory, we could relocate nests that are close to the surfline, but it is not the FWC’s policy for us to do it at this time,” said BGSTA Board member Mel Csank. “BGSTA monitors the nests before, during and after the storm and reports if they are covered by water and for how many days, or if a nest is washed away. It is very common for the stakes and tape to wash away, but the nest survives the storm and the hatchlings emerge with no issues. However, a nest can be destroyed by erosion of the sand, or the storm may deposit massive amounts of sand on the nest, making it impossible for the hatchlings to emerge.”

There have been 20 documented green sea turtle nests on island so far this nesting season.

As of Friday, August 23, there were 608 nests documented by patrol volunteers (22 were green nests and the rest loggerhead), and 606 false crawls have been reported. A false crawl occurs when a turtle makes its way onto the beach but doesn’t produce a nest.

There were 382 loggerhead turtle nests documented on Cayo Costa this year, and 17 nests are green turtles.

Newer PostHampton Boney publishes his first book, based on a tarpon dream
Older PostSign up now for the Great Beach Cleanup