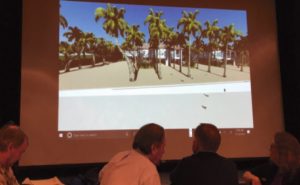 A  group representing The Gasparilla Inn & Club breathed a collective sigh of relief at the Boca Grande Historic Preservation Board meeting on Wednesday, Dec. 12, as Lee County staff recommended approval and the board passed a motion of approval for the new Beach Club project where the island dog park is currently located.

Mary O’Bannon represented The Inn, along with Planning Director Tina Ekblad from Morris Depew, Roger Janssen from Dailey Janssen Architects, Fernando Wong from Fernando Wong Outdoor Living Design, Jenna Persons from Strayhorn & Persons Law and others. They presented the board with a complete virtual tour of the new “Gulf Area Parcel,” otherwise known as the “North Parcel” in previous renderings.

Ekblad gave a brief history of The Inn and its standing in the community, and explained that they had met with all island authorities and public works leaders to make sure the new plan meets all standards of safety and utility ease of access.

“We realize that The Inn plays a vital role in Boca Grande, and to that end we have worked diligently to make a project that is low impact, low density and self contained,” Ekblad said. “It is with these efforts in mind that we look forward to redeveloping the Gulf Area Parcel, immediately north of the existing Beach Club facility.”

The Gulf Area Parcel is where the dog park is now. Eventually there will be nine new cottages built there – two four-bedroom cottages, three three-bedroom cottages and four two-bedroom cottages – as well as a new pool and cabana specifically for the cottages, a new tennis pro shop, a new Inn Adventures building (where kayaks, golf carts, etc. are rented through The Inn), a new yoga facility with a meditation garden, a new fitness center and pool, a new maintenance facility (a downsized version of the maintenance lot that currently sits on the east end of the dog park) and much, much more parking.

The new cottages, which will be raised 10 feet above finished grade, would be built featuring a staggered composition to create “quads” in between the structures, and to ensure the privacy of guests. They will feature sitting areas below each building, as well as parking.

One major change to the original plans that was announced at Wednesday’s meeting was the ingress/egress to the new development. Instead of having a one-way entry from 5th Street and a one-way exit on 7th Street, The Inn’s new plan includes both entry and exit from 5th Street. There will be three other vehicle access/exit points on 7th Street, but they will primarily be for emergency vehicles and maintenance workers. There will be five pedestrian gates on fenced and landscaped property, two along 5th Street and three along 7th Street.

The plans were changed, Inn representatives said, primarily because of community concerns regarding safety issues with the old plan.

Janssen said, “One of the biggest decisions was the entry and access point. As you can see, it keeps all of the traffic at this main intersection and away from Gasparilla Road.”

Janssen wrapped up his presentation by saying, “We were introduced to the Inn owners more than 12 years ago, and we have become very familiar with Gasparilla Island’s architecture and the Historic District. Our goal was for a simple composition, taking our architectural cue from existing buildings around the area and sticking with the traditions of The Inn and that of Boca Grande. It has been a real thrill to work with such a large, blank canvas like this … it’s a project of a lifetime.”

There was little public comment regarding the project. Gilchrist Avenue resident Tom Bowers came to the podium and praised the plan, particularly the fact that The Inn stressed additional parking so much.

“As you know, parking on the historic median has been an ongoing issue for all Gilchrist residents for years,” he said. “Our interest in the plan is parking, and we have been assured by The Inn that ample parking has been provided. Based upon these assurances I am pleased to recommend it to this board.”

Bayne Stevenson, a prominent business and property owner in the community, also came forth to praise The Inn’s plan.

“Being a stakeholder in the village where I own three commercial properties – two directly across from Inn property – I am very pleased with this thorough presentation and the effort that went into the design. I am 100 percent in favor of it, I think it will enhance the character of Boca Grande.”

There was little board comment either. Board Member Dana Robinette asked about the color of the new buildings, and was told they will be a cream color with blue accents. Continuity in the color pallet will eventually carry over to all of the Beach Club buildings and cottages on the Gulf Area Parcel and South Parcel.

Robinette also asked if there would be a need for increased employee parking, and was told that it wouldn’t be necessary as The Inn has no plans to hire increased staff for the new cottages and facilities.

Board Member Becky Paterson asked if guests would be told not to park on Gilchrist median, and if The Inn would be enforcing that stipulation. O’Bannon said they would be doing their best to keep all parking – overflow and otherwise – off the median strip, and that a valet service would be utilized for large events where people might not have convenient parking options due to overflow.

“If our parking is full, we will have the valets park cars on the Gulf Area Parcel,” she said. “We believe we will keep everything self-contained. If I have to stand out there with a safety control belt on and do it myself, I will.”

Board Member Susan Hanafee asked if there were plans for a new dog park on the island, to which O’Bannon replied that Lee County Parks & Recreation was working on a plan for a full-featured dog park facility, which would include separate parks for little dogs and big dogs, and that it would quite possibly be located on Wheeler Road where the ball field is now.

The board eventually voted unanimously to approve The Inn’s package as presented.

If all goes according to plan, demolition of the dog park and western tennis courts would take place in May of 2019. The current tennis pro shop would be demolished and relocated, and a new Inn Adventures building and fitness/yoga facility would be built on the new parcel. O’Bannon said they will continue the process for a development order and permitting, and if The Inn is allowed to begin construction site work in may of 2019 they hope to be complete by May of 2020.

The “South Parcel,” where the Gasparilla Inn Beach Club is currently located, will also be renovated. That, however, is a completely separate project and will be address at a later date.