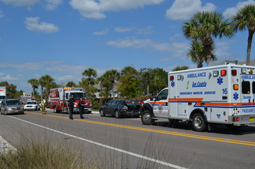 On Friday, March 18 at approximately 4:50 p.m. the Boca Grande Fire Department and Lee County Sheriff’s deputies responded to a two-vehicle accident at the intersection of 7th Street and Gasparilla Road. One man was transported to an area hospital with leg and head abrasions. One citation was issued.

On Wednesday, March 23 at approximately 3 p.m. they also responded to a two-car accident at Boca Grande North in the 6000 block of Gasparilla Road. One driver had stopped to let a pedestrian cross in the crosswalk when their vehicle was struck from behind by another vehicle. Three occupants of those vehicles were transported to local hospitals with non-life treatening injuries.

Traffic, however, was backed up all the way to 18th Street for quite a long time.