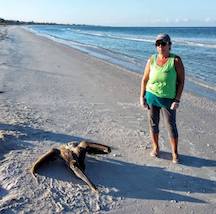 Boca Grande Sea Turtle Association patroller Denise Drago Juergens went above and beyond her regular duties caring for the turtles one morning last week. She discovered a pelican in extreme distress during her morning walk near the The Boca Grande Club.

On another day, patrollers found a baby turtle stuck in some roots on the beach. They removed the roots from around its neck and flippers, and found it was ready to be released. The turtle was named “Freedom.”

Larissa was found wandering on the beach two weeks ago by BGSTA patrol members. She is still re-cooperating at Mote Marine in Sarasota and is doing well. She now has a nice clean carapace, no more barnacles and her flipper is healing well.

“It’s still very busy for the patrol members right now as we recently are getting near the end of the season,” Csank said.

As of Friday, Sept. 13, there were 624 nests documented by patrol volunteers (22 were green nests and the rest loggerhead), and 592 false crawls have been reported. A false crawl occurs when a turtle makes its way onto the beach but doesn’t produce a nest. Patrol members said they expected a high number of false crawls in June due to the beach renourishment project.