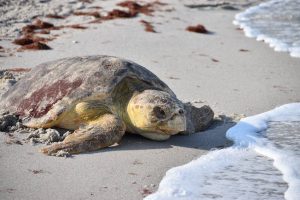 Despite the effects of red tide, sea turtle nest numbers are continuing to grow, hatchlings are making their way to the water, and excavations are being done by patrol members on a consistent basis.

As of August 10, the Boca Grande Sea Turtle Association reported 666 Caretta caretta (loggerhead) turtle nests on the island. There were 605 reported false crawls (when a turtle comes up onto the beach but does not lay a nest). One Chelonia mydas (green) turtle nest has been reported so far this year.

On August 14, patrol members hosted a loggerhead hatching release at 4th Street beach. The tiny turtles were guided into the sea by a group of onlookers who were enjoying the beach that evening.

If you’re on the beach and see what you think is a red tide-intoxicated baby sea turtle, the best thing to do in that situation is to call the Florida Fish and Wildlife Conservation Commission (FWC) hotline (888) 404-FWCC and report it. FWC will then contact the BGSTA to pick it up. This allows FWC to track and document every element of the stranding, and they will work with the rehabilitation agencies to get the hatchling to the place that is most appropriate. It is not advised that you touch a hatchling, but if you think it is in distress, gently place it in a bucket with some damp sand, cover it with a towel and wait for a volunteer to pick it up.

The BGSTA is looking for some kindhearted folks who live locally, have a boat and might be interested in transporting stranded turtles to the Clinic for the Rehabilitation of Wildlife (CROW) facility on Sanibel Island.

There are no turtles in need of transporting at the moment; this is a request for the future, for when turtles are rescued.

Currently, transporting a turtle to CROW takes about four hours (round trip) by car, so the trip would be much shorter by boat and less stressful for sick or injured turtles.

Turtle patrol volunteers would like to remind everyone to keep their pets on leashes,

If you come across a sea turtle that is stranded or dead, or if you see someone disturbing a nest or turtle, call the FWC at (888) 404-FWCC.

The BGSTA is actively looking for volunteers. Training and supplies are provided. If you’re available a few mornings a week to assist, go to facebook.com/seaturtleawareness or send an email to bocagrandeseaturtles@gmail.com to find out more details.