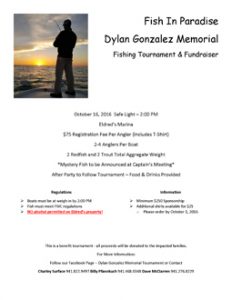 On June 19 of this year, Billy Pfannkuch’s life changed dramatically as he and his best friend, Dylan Gonzalez, were involved in a very serious boating accident in the waters near Eldred’s Marina.

While Billy was seriously injured, Dylan’s injuries were extreme, and he passed away. To honor Dylan’s memory, Billy and Dylan’s friends and family have organized a special fishing tournament, which will also help to defray costs for Dylan’s family in the wake of this tragedy.

The tournament will be held on October 16, beginning at daylight and ending at 2 p.m. Anglers will set out from Eldred’s Marina. The cost for entry is $75 per angler, which includes a tournament T-shirt.

Additional T-shirts will be available for $25 each, but they must be ordered by October 1. Two to four anglers per boat are acceptable. A minimum $250 sponsorship is also required per team (which includes one parking pass and one shirt).

Make sure to turn your registration forms in as early as possible, as team/company names will be put on the shirts prior to the tournament. Winners will be the ones who catch the two biggest redfish and two biggest trout (judged by total aggregate weight).

Boats are required to be at the weigh-in by 2 p.m. Fish must meet FWC regulations. All anglers must have a valid fishing license, and all boats must have current registration.