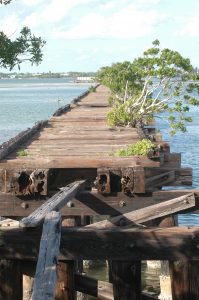 BY MARCY SHORTUSE – If you’ve been on or off the island recently you might have noticed some work crews surrounding the old railroad trestle near the mainland. Contrary to what you may have heard, they are not tearing the trestle out. They are instead inspecting the trestle and, in some circumstances, replacing parts of the structure.

According to Tina Powell, Charlotte County’s Park and Natural Resources Division Manager, representatives from the West Coast Inland Navigation District did a comprehensive assessment of the trestle earlier this year, and the ongoing project is a result of that assessment.

Some pilings and other pieces of the structure are being replaced as workers see fit.

Powell said there should be no problems with the project affecting marine navigation in the area at this time, but when the workers get to the area of the swing bridge those channels will be closed during construction. A Notice to Mariners has gone out to the Coast Guard regarding that closure.

The project is expected to take 90 days to complete, and will cost the county approximately $240,000.